German scientists have found no traces of E coli bacteria at an organic vegetable farm believed to be the source of an outbreak that has killed 22 people, but said this did not mean their suspicions were wrong.

Even though first laborator tests on beansprouts from the farm were negative, officials said they were not surprised because any contaminated produce could have been long since distributed.

In Bienenbuettel, the manager of the farm said he could not understand how his small organic food operation could be the source of an infection that is usually transmitted through faeces, or food or water contaminated with faecal bacteria.

The rare Shiga toxin-producing E coli strain found in this outbreak is known to be able to lurk in cows' intestines.

Scientists believed investigators were now on the right trail.

A number of the victims were linked to restaurants that had been supplied by the organic farm in Bienenbuettel.

The relief in Germany that investigators had finally found a possible source of the bacteria was tempered by the cautious tone of official statements, and by mounting losses for farmers and retailers across Europe caused by three weeks of panic.

Scientists say the contamination may have been on or in the bean seeds themselves, or in the water used to grow them, or have come from a worker handling them.

In Brussels, the European Commission has said it would hold a special meeting of EU farm ministers in Luxembourg tomorrow.

One EU source has said that the ministers would discuss financial aid to fruit and vegetable producers hit by the E coli crisis.

German officials under intense pressure to identify the source of the outbreak, have been warning consumers to avoid tomatoes, cucumbers and lettuce, and at one stage said Spanish cucumbers might be the source.

The rare and highly toxic strain of Ecoli has killed 21 Germans and one Swede.

In Geneva, the World Health Organisation (WHO) said it was awaiting more information from the Robert Koch Institute, the German institute for disease control.

The health emergency has strained ties between EU members Spain and Germany and led Russia to ban imports of EU fruit and vegetables.

Spanish farmers say lost sales have been costing them €200 million a week, and officials said they might claim compensation. The crisis could put 70,000 people out of work in Spain, which already has the highest unemployment in the EU.

Professor Hunter said that 'they're very difficult to grow hygienically and you have to be so careful not to contaminate them.' 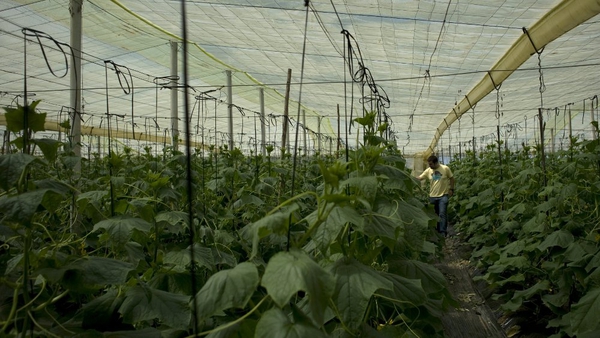