German hospitals are struggling to cope with the flood of E coli victims, Health Minister Daniel Bahr has said.

More than 2,000 people have been infected across Europe and the death toll has risen to 21.

A German official has said that German-grown beansprouts may be the cause of the outbreak.

Gert Hahne, the spokesman for the Lower Saxony agriculture ministry, said an alert will be sent out later today warning people to stay away from eating the sprouts, which are often used in mixed salads.

The Food Safety Authority of Ireland said it had been informed by German authorities that the beansprouts implicated in the outbreak were produced for the local market only and had not been exported.

Officials in Lower Saxony said they were investigating a local fruit and vegetable supplier suspected of passing on contaminated produce, a spokesman from the state consumer protection office said.

Hospitals in the northern port of Hamburg, epicentre of the outbreak that began three weeks ago, have been moving out patients with less serious illnesses to handle the surge of people stricken by a rare, highly toxic strain of the bacteria.

‘We're facing a tense situation with patient care,’ Mr Bahr told the Bild am Sonntag newspaper. He added hospitals outside Hamburg could be used to make up for ‘insufficient capacity’ in Germany's second largest city.

‘We want to discuss with doctors about whether those who recently retired can be reactivated,’ she said, adding that medical staff in Hamburg were battling exhaustion.

Mr Bahr reiterated the German government's warning for consumers to stay away from tomatoes, cucumbers and lettuce in northern Germany.

Authorities in Germany are racing to track down the source of the pathogen, which has infected people in 12 countries - all of whom had been travelling in northern Germany.

Reinhard Burger, president of the Robert Koch Institute, the German centre for disease control, said the death toll had risen to 21.

Many of those infected have developed haemolytic uraemic syndrome (HUS), a potentially deadly complication attacking the kidneys.

The rare strain of E coli has the ability to stick to intestinal walls where it pumps out toxins, sometimes causing severe bloody diarrhoea and kidney problems. Some patients have needed intensive care, including dialysis. It has hit women more than men, and most of those who have died were elderly.

Officials had identified a restaurant in the northern port city of Luebeck as a possible place where the bug had been passed to humans after at least 17 people infected with E coli had eaten there and one later died from complications.

The proprietor of the German meat-and-potatoes restaurant told Reuters his kitchen tested negative for the deadly E coli strain and none of his staff had fallen ill. 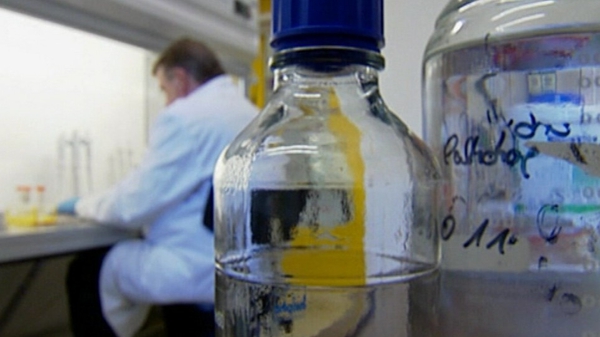