Corporate sponsors Coca-Cola, Emirates Airlines and Adidas have expressed concern about allegations of corruption within football's governing body FIFA and have warned that it could harm the game.

The companies are long-time partners with FIFA, providing money, goods and services to support its events worldwide - most notably the World Cup.

'The current allegations being raised are distressing and bad for the sport,' Coca-Cola spokesman Petro Kacur said.

'We have every expectation that FIFA will resolve this situation in an expedient and thorough manner,' Mr Kacur added.

FIFA has been beset by accusations of bribery involving members of its inner circle of executive committee members since the vote to decide the hosts of the 2018 and 2022 World Cups took place in Zurich in December.

FIFA President Sepp Blatter yesterday denied there was a crisis in football after a leaked email suggested Qatar had bought the rights to host the 2022 World Cup.

In an extraordinary press conference, Mr Blatter vowed he would move to toughen up FIFA's ethics committee, admitting what had happened in the last few days had caused 'great damage' to its image.

Ten of the 24 members of the executive committee have been subject to allegations of corruption in the last year.

The ethics committee said it would launch a 'full inquiry' into bribery allegations made against them.

'The negative tonality of the public debate surrounding FIFA is neither good for football nor for FIFA and its partners,' said a spokesman for Adidas.

The spokesman said Adidas plans to continue its long partnership with FIFA, which stretches back more than 30 years.

Since 1970, Adidas has provided the official match ball for World Cup matches and is set to be an official licensee and supplier for the World Cup in 2014.

Coca-Cola is one of the largest corporate partners of FIFA and has been an official sponsor of the World Cup since 1978.

The Atlanta-based company provides cash, products and services in support of FIFA-organised events around the world, including the FIFA World Youth Championship and the FIFA Women's World Cup.

Emirates airline has also said it is disappointed by the scandal.

'Emirates, like all football fans around the world, is disappointed with the issues that are currently surrounding the administration of the sport,' the airline said.

'We hope that these issues will be resolved as soon as possible and the outcome will be in the interest of the game and sport in general.'

Meanwhile, a spokesperson for the FAI said that the organisation is consulting with senior members of UEFA, while keeping watch on developments at FIFA.

The comments come after a call from the English Football Association that FIFA postpone its presidential election scheduled for tomorrow.

Mr Blatter is standing unopposed to be re-elected following Mr Bin Hammam's decision to withdraw from the contest at the weekend. 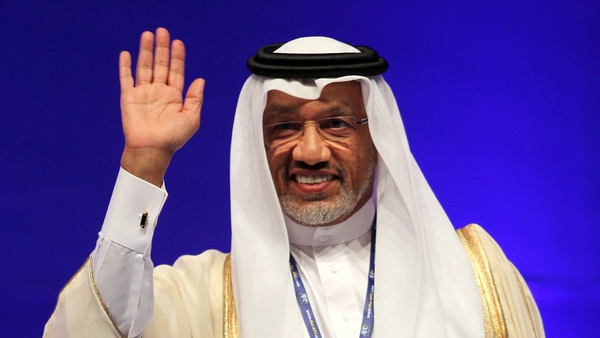