US President Barack Obama took to the stage in Dublin this evening in front tens of thousands of people with the words, 'my name is Barack Obama, of the Moneygall Obamas.'

'I've come home to find the apostrophe we lost somewhere along the way.'

Taoiseach Enda Kenny introduced the president, saying: 'If there is anyone out there who still doubts that Ireland is a place where all things are possible ... today is your answer.'

Mr Obama said he wished to thank the Taoiseach, his wife, the President for the welcome they afforded him and the gardaí and the Lord Mayor for letting him 'crash' the party.

He said he wished somebody had traced his Irish roots when he was a politician in Chicago, which he dubbed the Irish capital of the mid-west.

In a resounding address, the president said: 'This little country that inspired the biggest things - your best days are still ahead of you.'

He concluded his speech with a nod to his 2008 campaign slogan - 'is féidir linn' drawing a huge cheer from the crowd.

The speech followed performances from a range of Irish musical entertainers. 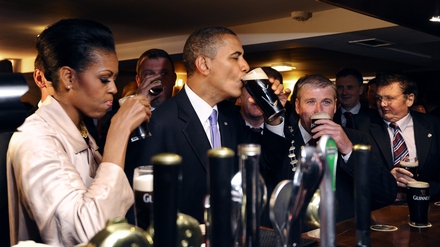 The US President and First Lady spent the afternoon in Mr Obama's ancestral home of Moneygall, Co Offaly.

A mixture of sunshine and heavy rain greeted the president as his helicopter touched down in the local GAA grounds and the pair travelled by car into the village.

Both President Obama and his wife Michelle embraced Henry Healy, Mr Obama's distant cousin, who greeted them on arrival.

They then spent about 20 minutes meeting and greeting some of the hundreds of onlookers before visiting the local 'siopa beag' and having a pint in Ollie Hayes' pub.

Publican Ollie Hayes said: 'We have been waiting in hope for this very day and I can say that is without doubt one of the proudest days of my life.

'It's not every day that the US President drops by our bar for a pint. It really is a remarkable day for all the community here in Moneygall. We are going to talk about this day for ever more as the day that Moneygall made history.'

Barack Obama and his wife landed at Dublin Airport this morning amid tight security in wet and blustery conditions.

They were welcomed by Tánaiste Eamon Gilmore and the US Ambassador to Ireland, Dan Rooney.

The Obamas were then taken to Áras an Uachtaráin for a private meeting with President Mary McAleese.

The President held talks with the Taoiseach at Farmleigh this morning, where they discussed a range of issues, including Ireland's deficit problems and US planes stopping at Shannon.

Enda Kenny said Mr Obama will bring his golf clubs the next time he visits the country.

Mr Obama said the bond and relationship between the two countries could not be stronger. He said 'we will do everything to help' Ireland in its economic recovery.

He said he was inspired by the progress made in the peace process in Northern Ireland.

The President said Ireland punches above its weight in a range of issues, including food security and peace keeping.

President Obama left Ireland for London just before 9.30pm, with Air Force One departing early due to the volcanic ash cloud. 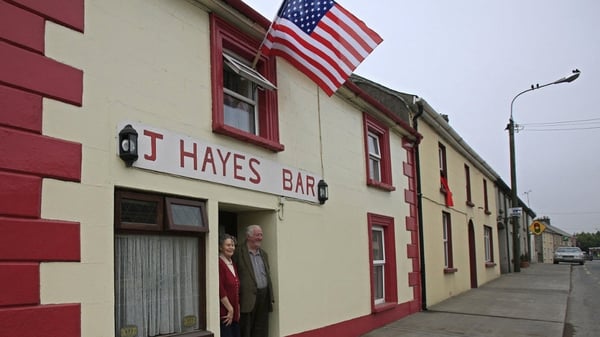 Irish, US flags raised in Moneygall