Spaniards are protesting for a seventh day over sky high unemployment and austerity.

Witnesses estimated that at least 20,000 people were on Madrid's main square, despite a law prohibiting political events on the eve of local elections.

The ban came into effect at midnight and has been upheld by the supreme and constitutional courts.

'I'm protesting because I've got no job future in Spain even though I've finished my degree in tourism,' said 25-year old Inma Moreno on Madrid's Puerta del Sol plaza.

'This should make the political classes aware that something is not right.'

Yesterday, some among the young protestors, dubbed 'los indignados' ('the indignant'), told Reuters that they feared the police would crack down.

But the ruling Socialists, who face heavy losses tomorrow, signalled that police would not enforce the ban.

Prime Minister José Luis Rodríguez Zapatero, who has failed to contain the highest unemployment in the European Union at 21.3%, said he respected the protestors.

Analysts said that police action against the peaceful demonstrations would be disastrous for the Socialists.

The protestors have departed from years of patience over government austerity measures and a youth unemployment rate of around 45%, making their voices heard before the polls.

They have called on people not to vote tomorrow for the two main parties, the Socialists or the centre-right opposition Popular Party.

Spaniards are due to elect 8,116 city councils and 13 out of 17 regional governments.

The country pulled out of recession at the start of last year, but the economy has failed to gain serious momentum and unemployment has spiralled ever higher.

The protests have resonated with Spaniards of all ages, including those who remember unrest which swept much of Europe more than 40 years ago.

Hundreds of protesters turned out in Dublin, Cork and Galway this afternoon to show their solidarity with the Spanish movement. 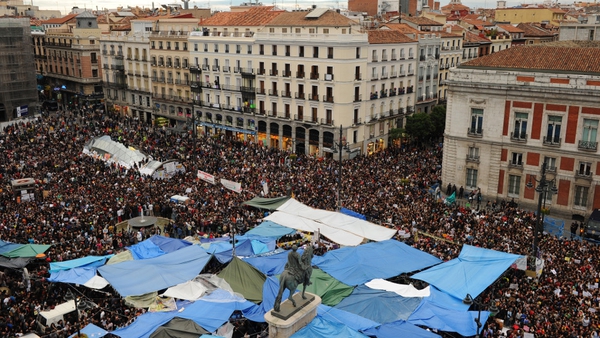