Queen Elizabeth II has been given a tour of the National Stud in Kildare on the third day of her State visit.

This evening, the British Ambassador will host a return event, celebrating the visit at the Convention Centre in Dublin.

2050 Gardaí say there are no planned traffic restrictions in the Dublin area tomorrow morning.

The parking restrictions remain in force in the Phoenix Park but it will be open to traffic. 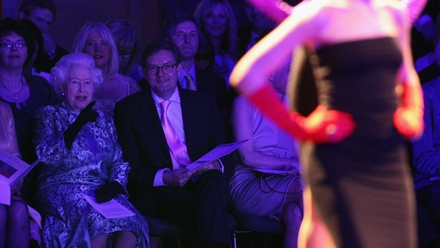 2028 Cork's civic and business leaders have appealed to the public to come to city tomorrow. They say it remains open for business despite the disruption caused by the Queen's visit.

The Royal couple are expected to spend around two hours in the city visiting the English Market and the Tyndall Institute.

2024 The Phoenix Park is open to traffic, as are the North and South Quays. The Liffey bridges are open to traffic except North Wall/Samuel Beckett Bridge.

2006 Gardaí now say that 12 people (11 men and one woman) have been arrested for public order offences in the Connolly Station area.

All 12 will appear before a special sitting of Cloverhill District Court this evening at 9.30pm.

1936 Viewing figures for RTÉ's coverage of the State Dinner in honour of Queen Elizabeth last night peaked at just over 875,000. The programme was watched live by an average of over 680,000 people.

During the visits to the Guinness Storehouse, the Memorial Gardens at Islandbridge and Croke Park viewer numbers remained constant at over 200,000.

1916 Ten known republican activists have been arrested near Connolly Station in Dublin this evening.

They were stopped and searched as they made their way to the Convention Centre.

Rockets, flares and other fireworks along with bottles, fishing leads and other potential missiles were found.

The ten people who have been arrested are being detained under Public Order legislation at Store Street Garda Station.

1844 Road closures are in place in the Phoenix Park, on Parkgate Street and along the North & South Quays until 8.30pm. The Liffey bridges will also be blocked at times.

The N4/Lucan Road is closed inbound at the M50 Interchange until 8.30pm with diversions onto the M50 both ways.

The Luas Red Line is only operating from Tallaght to Connolly until 8:30pm.

1842 AA Roadwatch says traffic is extremely busy in Dublin on the Merrion Road onto Strand Road and through to the East Link toll plaza. Traffic is also heavy on Sandymount Road.

This is due to the closure of Samuel Beckett Bridge, North Wall Quay and Guild Street. 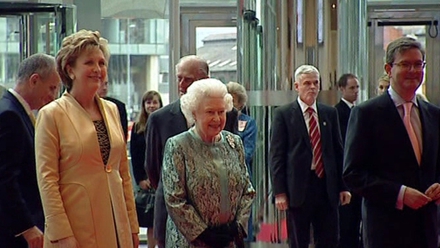 1810 The Queen has arrived at the National Convention Centre for tonight's event. 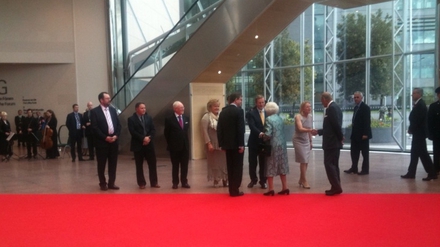 1800 Around 2,000 guests have arrived at the National Convention Centre for an indoor garden party hosted by the British Embassy.

Politicians, actors, sports stars and members of the media are among the invited guests.

1642 Gardaí have announced the roads that will be closed in Cork tomorrow:

There will be no access to the city centre from the western suburbs via the Western Road.

Traffic attempting to enter the city centre via this route will be diverted via Sundays Well Road or Wilton Road.

1636 Guests for tonight's concert and fashion show in the Convention Centre have begun gathering for security checks at the O2.

1505 Dublin Bus says that due to security arrangements there will be significant delays to Clondalkin, Ballyfermot and Lucan services until further notice.

1503 AA Roadwatch says parking restrictions will be in place in Cork city this evening from 6pm.

1424 AA Roadwatch is urging people to avoid the M50. Closures are imminent as the Queen returns to Dublin.

1416 The Duke of Edinburgh Prince Philip has said it is very nice to know that so many people are involved in the President's Award and getting so much pleasure and encouragement from it.

Prince Philip was speaking at a reception in Farmleigh organised by Gaisce - The President's Award.

Addressing the Gaisce members, Prince Philip said that doing the work to achieve the award may seem pretty awful at the time. But he added that like all things, it is wonderful when you stop doing it and when you can bask in the award for the rest of your lives.

1414 Gardaí say that rolling traffic calming restrictions are in place northbound on the M50 from J9.

1300 Luas says there will be red line Disruption between 1530-20.30. There will be no service in Docklands for this period.

1228 The Duke of Edinburgh has arrived at Farmleigh House in Dublin for a reception with members of Gaisce - The President's Award.

At the reception Prince Philip will meet leading figures behind Gaisce, as well as award recipients and current participants of the programme from both sides of the border.

Minister for Children Frances Fitzgerald is also present. The award is Ireland's national challenge award programme for young people aged between 15 and 25.

1209 Dublin's M50 northbound is currently closed from J10 Ballymount to J7 Lucan. There are no closures southbound.

1200 The Samuel Beckett Bridge has been closed to traffic.

1153 In Dublin City Centre, North Wall Quay has been closed.

1149 A horse reared up on his hind legs as Queen Elizabeth was in close attendance. 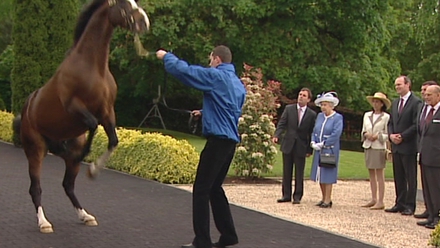 1139 The Queen has offered her sympathies following the death of former Irish taoiseach Garret FitzGerald.

'I was saddened to hear this morning's news of the death of the Garret FitzGerald, a true statesman. He made a lasting contribution to peace and will be greatly missed,' she said.

1128 The Queen has arrived at the National Stud. 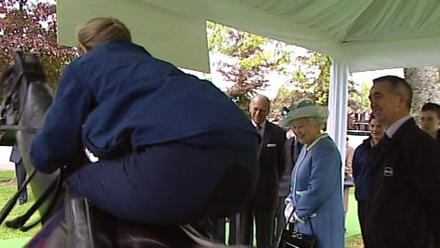 1123 Gardaí have advised that delays are being experienced on the M50 between J6 and J10 and on all cross routes.

1105 The Defence Forces has posted a nice video to YouTube from the War Memorial yesterday.

1103 All restrictions have been lifted on the M50. Gardaí say that minor delays will be experienced because of earlier delays.

1019 Responding to the Queen's speech at Dublin Castle last night, Sinn Féin President Gerry Adams said: 'I believe that her expression of sincere sympathy for those who have suffered as a consequence of our troubled past is genuine.'

1000 Listen back to Morning Ireland's coverage of the Queen's speech last night at Dublin Castle.

0945 Gardaí say the Phoenix Park has now been closed to all traffic. Details of the Dublin traffic management plan here and Kildare here.

0930 Luas Red Line service delays are expected between 10am and 11pm from Blackhorse to Tallaght today.