Ireland's economic recovery continues to be weighed down by the property collapse, according to the European Commission.

The aftershocks of the property collapse means growth this year is reaching just 0.6%, lower than the Government's target of 0.75%.

The European Commission's Spring economic forecast shows that unemployment this year will reach 14.6% and fall only slightly to 14% next year.

The report says emigration has not had as positive an impact on the unemployment levels as previously thought.

However, Ireland's exports were continuing to show strong growth.

The Spring forecast also suggests that higher interest rates pose a risk to the Irish economy, although this could be offset if Ireland was granted a reduction in the interest rate paid for the EU-IMF rescue package.

Meanwhile, Ireland's budget deficit will narrow to 10.5% in 2011, higher than the Government forecasts due to lower tax revenue.

Ireland's public debt is expected to rise to 118% of GDP by 2012, although that could be offset if the Government proceeds with the sale of some €5bn worth of State assets.

The report shows Ireland is gaining competitiveness thanks to wage moderation.

However, the report contains a reminder that Irish wages levels between 2002-2006 were among the highest in the eurozone.

However, Irish exports remained vulnerable to US and UK currency movements, while sluggish domestic demand remained a problem.

Speaking to reporters at the launch of the figures, the EU Commissioner for Economic and Monetary Union Olli Rehn welcomed Tuesday's jobs initiative.

He said, 'Growth and jobs are now the real challenge for Ireland, and in terms of growth I think it's important that export growth and industrial production are showing positive signs.

'In order to support this tendency it is important that the government is taking the initiative in terms of its recent jobs initiative.'

Minister for Public Expenditure and Reform Brendan Howlin told Reuters long-term rescheduling of Ireland's debt is something that would be desirable for the Government.

Stretching out loan and interest repayments over a longer term would reduce the immediate burden on the State if lenders, including the EU and IMF, were to consent to a change in the terms.

The Minister did not outline a time frame for any such negotiations.

Mr Howlin said the Government would deal with the issue.

In the meantime, the issue of securing a lower interest rate for the bailout package is of more pressing concern.

Mr Howlin said the Government wanted a better rate and would not accept being treated less favourably than any other eurozone partners receiving financial assistance.

The Minister did not accept that any reduction in the interest rate would have to be accompanied by either stricter austerity measures or any compromise on Ireland's corporate tax rate. 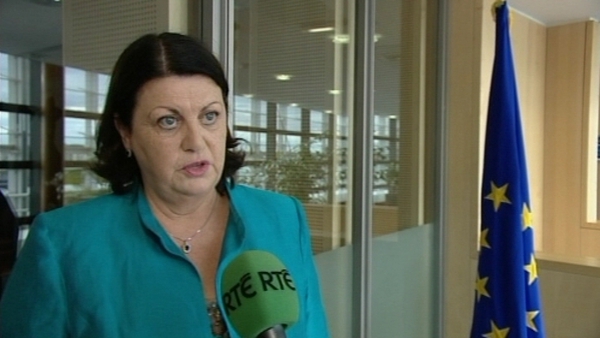