Taoiseach Enda Kenny has defended the introduction of a private pension levy to pay for the Government’s jobs initiative, saying it was a modest proposal.

Speaking in the Dáil, Mr Kenny said yesterday's announcement will not solve all our unemployment problems but will begin to bring confidence to the economy.

Fianna Fáil leader Micheál Martin criticised the levy being put on private pensions saying it is not credible to say that the removal of €1.8bn over four years will not have a negative impact.

Mr Martin said a similar move was made in Britain and had a disastrous impact.

He had also called on the Government to publish all documentation associated with yesterday's jobs' plans.

Mr Kenny said there was no secrecy surrounding the initiative.

Sinn Féin Gerry leader asked 'where are the jobs?' and said a more meaningful stimulus for job creation was needed.

Costs associated with the pensions industry is a matter that should be investigated, Mr Kenny said.

He said the charges imposed by fund managers could be reduced in line with levels in the UK and said he would refer the matter to the Minister for Finance.

He was responding to the Independent TD Shane Ross who said the pensions' industry was a goldmine and a gravy train for a large number of people who should be taxed.

Speaking on RTÉ's Morning Ireland, he described the package as focused and significant.

Mr Howlin said that the pension levy would be neither increased nor prolonged. He said tourism would benefit from the initiative.

He also said the ESRI's suggestion to cut spending and increase tax to eliminate the budget deficit by 2014 would be unsuitable. 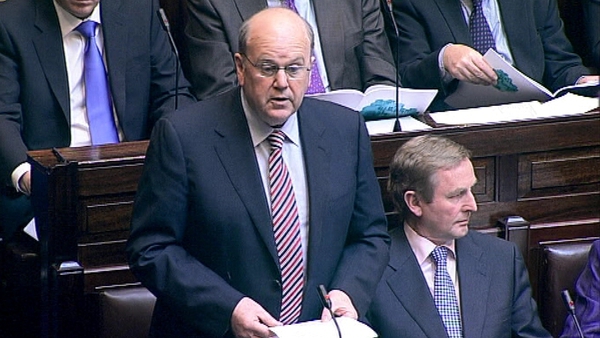