Minister for Finance Michael Noonan has outlined the details of the Government's jobs initiative in the Dáil.

Minister Noonan announced a levy on private pension funds, a temporary abolition of the travel tax and a reduction in the lower rate of VAT from 13.5% to 9%.

2045 Minister for Arts, Heritage and the Gaeltacht Jimmy Deenihan described the jobs initiative as 'exciting and targeted'.

Minister Deenihan said the reduction of the travel tax and the reduction in VAT would help boost the arts industry by increasing the number of tourists coming to Ireland for the many cultural events.

2014 Watch further coverage of the jobs initiative, as well as interviews with Michael Noonan and Pearse Doherty, on tonight's Six One News.

2000 'The proposals outlined by Minister Noonan today will not only fail to create employment, but have the potential to further depress consumer spending and lead to an increase in unemployment,' Sinn Féin's Pearse Doherty said in a statement this evening.

1945 Minister Michael Noonan said he is prepared to talks to those in the pension industry about the levy.

1920 Transport Minister Leo Varadkar said the money available to carry out works on local and regional roads has to be drawn down by November.

Mr Varadkar said local authorities have assured him the works can be carried out towards the end of the summer. Ms Burton said the top-up payment is meant to give people an incentive and cover some costs associated with working. She said the €50 would be valuable to people.

The Minister said a target of 1 July to get the scheme up and running has been set. She said by that time legislation to restore the minimum wage would be in place.

1903 The Minister for Social Protection said the National Internship Scheme would break the cycle whereby people cannot get jobs because they have no experience.

Joan Burton said it would allow people acquire meaningful job experience through a notion that is quite familiar to people in other countries.

Minister Burton said the Government expects private sector employers to 'step up to the plate' with regard to the scheme.

1900 Independent TD Finian McGrath wraps up the statements in the Dáil with a call for people to buy Irish and support Irish businesses.

1852 Independent TD Shane Ross said it was the first opportunity to judge the new Government.

Mr Ross said it was a 'damp squib' that promised much but delivered little.

He commended the measures on the tourism sector, but said the Government was only 'tinkering at the edges'.

1846 The Taoiseach said it was impossible to put a figure on the number of jobs that could be created under the plan, as he said a resurgence of confidence could not be measured.

Enda Kenny said the extent of jobs could not be predicted, but he said the target of 100,000 jobs during the period of Government is 'but a start'.

He said the number of people who will holiday at home this year as a result of the measures cannot be measured. He said he would be holidaying at home himself this year.

1845 Mr Kenny said the concerns of some areas of the pensions industry are understood and would be listened to by the Minister for Finance.

He said the Government made 'no bones' about making jobs a priority and he said if the crisis was not addressed it would only get worse.

1844 Asked about the pension levy, Enda Kenny said most of the funds are involved in overseas assets.

He said the measures are designed to focus on the more than 400,000 people who are not working in the country.

1840 Fianna Fáil Leader Micheál Martin said: 'One of the most striking omissions from today's 'Jobs Initiative' was the absence of any figure for estimated jobs to be created.

'My party will not be repeating the sort of negative and defeatist rhetoric that we saw from the last Opposition, but today's package taken as a whole will add little in terms of net job creation and represents a missed opportunity.'

1838 Tánaiste Eamon Gilmore said the 'whole focus' of the Government is to bring about economic recovery and get the country back to work.

Mr Gilmore said the plan was significant and focused. He said sectors of the economy where people can be put into work in the short term had been identified.

1836 Minister for Finance Michael Noonan is live on RTÉ's Six-One News at the moment.

1834 Enda Kenny said the programme was being financed in a fair and efficient way. He said the pensions funds being levied had been the beneficiaries of massive tax relief over recent years.

He said a reduction in the administrative cost-base of pension funds could offset the levy.

1832 Sinn Féin's Pearse Doherty says there is 'a better way, a different way. This is not even a drop in the ocean for what is needed.'

1830 The Taoiseach has said the plan is a 'downpayment' on the promise by the Government to put jobs at the centre of its agenda.

Enda Kenny said that Government targets on job creation would be achieved and he said all ministers would work hard to do that.

He said the Government is committed not to increase tax on work and investment and he described the corporate tax rate as being 'unnegotiable'. 1821 Read further details on the key points of the jobs initiative.

1819 Chief Executive of Irish Life Gerry Hassett said he is 'disappointed that ordinary workers trying to save for retirement are being targeted to help fund this jobs initiative'.

1815 Ryanair says it welcomes the removal of the travel tax, saying it has been a 'significant barrier to tourism growth in Ireland'.

1807 Sinn Féin's Pearse Doherty said hundreds of thousands of people across the country will be deeply disappointed and said the Government should have done more.

He said that only 348 jobs would be created under the plan.

1801 Fáilte Ireland has welcomed the initiative to increase employment in the tourism sector.

Fáilte Ireland Chief Executive Shaun Quinn said: 'This timely and significant initiative should provide a much-needed stimulus to the fortunes of tourism businesses around the country.'

1758 Fianna Fáil's Sean Fleming said people will look at today's document and ask 'where's the beef and where's the jobs'.

He criticised the levy on pension funds and said they were being raided.

1755 Willie O'Dea also said he is 'bemused' at the fact that a levy on private pensions will be pay for the measures announced today.

He said the move was very unfair and described it as the biggest smash-and-grab raid since Nero.

1751 The Teachers' Union of Ireland said the education measures in the plan did not go 'far enough' and were a 'lost opportunity'.

1748 Minister for Justice Alan Shatter will tomorrow announce the full details of a holiday and other short-stay Visa Waiver Programme.

1740 Willie O'Dea said while he welcomed any plan that tackles the unemployment problem, he said the plan was 'minimalist'.

In relation to cutting employers' PRSI, Mr O'Dea said there may be a danger of employers reducing the wages of workers to ensure they can avail of the new PRSI rate.

Mr O'Dea is standing in for his party's finance spokesman Brian Lenihan.

1738 Read the full details of the jobs initiative.

1735 In his response, Fianna Fáil's Willie O'Dea says he intends to be as positive as possible about the jobs plan.

1734 Concluding his speech, Michael Noonan said the effects of the measures announced today will be modest and said there will be no extravagant claims made in that regard from the Government.

He said the plan points to a Government that is alive to the fact that it is possible to make policy changes for the better and is prepared to initiate those changes.

1725 Michael Noonan said he was aware of the concerns of those in the pensions sector, but he said the levy was not permanent and said they have in the past been the subject of massive tax reliefs.

The levy represents a significant contribution from the pensions sector and savers he said.

1723 0.6% levy on private pension funds is intended to raise €470m a year. It will operate for four years and will be payable in two annual tranches.

Minister said he chose to impose the levy because 'increases in tax would be more damaging to our economy'.

1717 Minister for Justice Alan Shatter will be bringing in changes to visa system, which will make it easier for visitors to come to Ireland.

1715 The Minister has announced the setting up of an internship programme. Those who take part will be paid €50 per week on top of their social welfare entitlements.

There will be 20,000 places made available for those who want to get back to education or who want to avail of training.

He said it signals a substantial and meaningful commitment and would cost €11m in 2011.

1709 Michael Noonan said the Government's economic strategy would lay the foundation for the rest of its agenda for change.

1708 Minimum wage will be restored to its previous rate from 1 July.

1706 The air travel tax is to be reduced to zero provided airlines open new routes and boost passenger numbers.

However, it is not being taken off the statute book and will be reinstated if airlines do not do so.

1705 The Government is reducing the VAT rate from 13.5% to 9% on a range of tourism-related goods and services.

1655 Michael Noonan described the measures as the first step to improve Ireland's economic competitiveness and said it was about encouraging employment.

He said an independent fiscal advisory council would be established by the end of the summer and would represent a new approach to the management of the public finances.

He also said Ireland's corporate tax rate of 12.5% is 'here to stay' as it is a 'vital element of our industrial policy'. 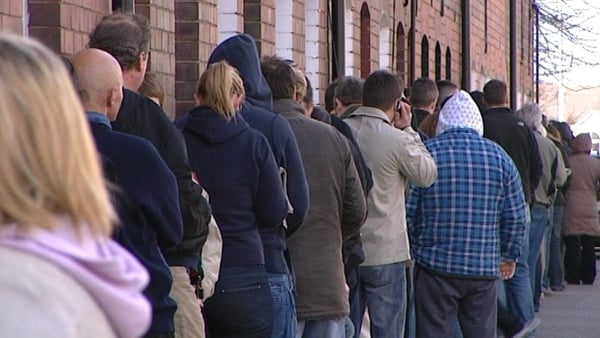