Firefighters in a number of counties are tonight tackling gorse fires in an effort to prevent flames from spreading further.

High winds and dry conditions have been making the task more difficult.

Units from the Offaly Fire Service are tackling two large fires that have spread onto Bord na Móna lands in the county tonight.

One fire is at Lemanaghan, between Ferbane and Clara, and the other is at Ballinagar, between Dangan and Tullamore, which is sending plumes of smoke across the area.

Around 450 Bord na Móna staff are also involved in the effort.

In Donegal, a large fire around Dungloe has been brought under control but fire personnel in the county are still working at a wooded area between Glenties and Ardara.

Efforts to contain a gorse fire near Bridgend are also ongoing.

Meanwhile, the National Trust in Northern Ireland estimates that thousand of acres on the Mourne Mountains in Co Down have been affected by gorse fires in recent days.

Police in Co Tyrone investigating the outbreak of gorse fires have arrested two children aged ten and 15 on suspicion of arson.

They were detained in the Sixmilecross area near Omagh.

The PSNI says the matter is being investigated by police and a file will be prepared for the prosecution service in due course. 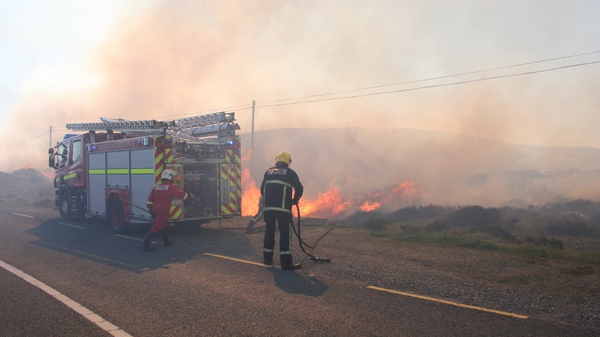