US President Barack Obama's anti-terrorism adviser, John Brennan, has said the Pakistani authorities had not been told about the operation to kill Osama bin Laden.

The founder of al-Qaeda died in a raid by US special forces in Pakistan.

Mr Brennan said the fact that Pakistan had not known about the operation meant the US helicopters involved had to leave the country's airspace as quickly as possible.

He also said US troops had been prepared to take Bin Laden alive if the opportunity arose, but he resisted and was shot in the head.

A US official said he was buried in the North Arabian Sea from the deck of a US aircraft carrier at around 7am, and that traditional procedures for Islamic burial were followed.

An intelligence official told reporters that DNA tests on the body showed a virtual 100% match to relatives.

At a ceremony at the White House this evening, President Obama said that justice was done.

US Secretary of State Hillary Clinton said the world should not forget that the battle against terrorism does not end with the death of Bin Laden.

The death ended a nearly ten-year worldwide hunt for the alleged mastermind of the 11 September attacks.

Bin Laden's killing, confirmed by officials in Pakistan, was a huge symbolic blow to al-Qaeda, which has been beaten back but is still a threat in many countries.

It prompted jubilant flag-waving celebrations in Washington and New York.

Governments and leaders praised the killing of Osama bin Laden.

It was the biggest national security victory for Barack Obama since he took office in early 2009 and could give him a political boost as he seeks re-election in 2012.

Mr Obama may now find it easier to wind down the nearly decade-old war in Afghanistan, begun after the 11 September, 2001, attacks on New York and Washington that killed nearly 3,000.

Mr Obama said US forces led a targeted operation that killed Bin Laden in a compound in Abbotabad north of Islamabad. No Americans were killed in the operation and they took care to avoid civilian casualties, he said.

A senior administration official said it was believed that three adults besides Bin Laden were killed, including one of his adult sons.

US officials said the CIA tracked Bin Laden to his location, then elite troops from Navy Seal Team Six, a top military counter-terrorism unit, flew to the hideout in four helicopters.

Bin Laden was shot in the head in an ensuing firefight. His body was buried at sea having been handled according to Islamic practice and tradition, US officials said.

Bin Laden's death triggered a travel alert for Americans worldwide, the US State Department said, warning of the potential for anti-American violence.

The Pakistani Taliban has responded to the killing by threatening attacks against Pakistan and the United States.

‘Now Pakistani rulers, President Zardari and the army will be our first targets. America will be our second target,’ Ehsanullah Ehsan, a spokesman for Tehrik-e-Taliban Pakistan (TTP), or Taliban Movement of Pakistan, told Reuters by telephone from an undisclosed location.

The international law enforcement agency, Interpol, called for extra vigilance and said the death did not represent the demise of al-Qaeda affiliates.

Car drivers blew their horns in celebration and people streamed to Lafayette Park across from the street, as police vehicles with their lights flashing stood vigil.

Many Americans had given up hope of ever finding Bin Laden after he vanished in the mountains of Afghanistan in late 2001.

‘The United States has conducted an operation that killed Osama bin Laden, the leader of al-Qaeda and a terrorist who is responsible for the murder of thousands of men, women and children,’ Mr Obama said.

Former President George W Bush, who vowed to bring Bin Laden to justice 'dead or alive' but never did, called the operation a 'momentous achievement' after Mr Obama called him with the news.

Martin Indyk, a former US assistant secretary of state for near eastern affairs, described Bin Laden's death as 'a body blow' to al-Qaeda at a time when its ideology was already being undercut by the popular revolutions in the Arab world.

But he criticised the US for launching the raid within his country's borders, saying it was a violation of Pakistan's sovereignty.

Afghan President Hamid Karzai called on the Taliban to refrain from fighting after the killing of the al-Qaeda leader and said the Taliban must learn a lesson from his death.

'The Taliban must learn a lesson from this. The Taliban should refrain from fighting,' Mr Karzai told a nationally televised news conference.

'We regard this as a continuation of the American policy based on oppression and the shedding of Muslim and Arab blood,' Ismail Haniyeh, head of the Hamas administration in Gaza, told reporters.

Though he noted doctrinal differences between Bin Laden's al-Qaeda and Hamas, Haniyeh said: 'We condemn the assassination and the killing of an Arab holy warrior. We ask God to offer him mercy with the true believers and the martyrs.' 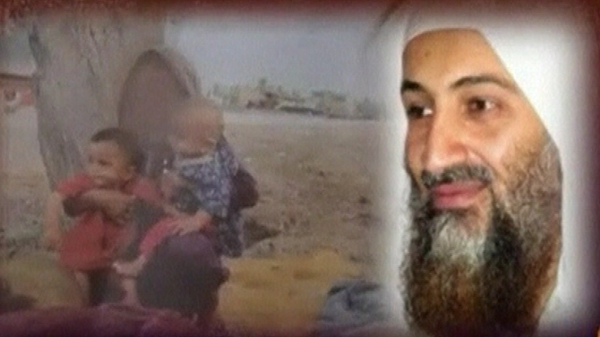