Speaking on a BBC Radio 4 Documentary about the Irish bailout, Mr Lenihan said that the governing council of the ECB had appeared to have believed that Ireland 'needed to be nailed down'.

He said he felt that the European Commission had a more relaxed attitude to Ireland.

Mr Lenihan said that the major pressure for the bailout came from the ECB and also said he came under pressure at a meeting on European Finance Ministers on 16 November 2010 to agree to a bailout.

He said he was even told to attend a press conference at the end of the meeting to announce the financial rescue package.

Mr Lenihan said he refused to do so because he did not have the authority of the government to agree to such a package.

When questioned about cabinet denials that talks were talking place, Mr Lenihan said that he had not thought it was appropriate to inform the public that he has holding exploratory talks in Brussels about a financial rescue package on 14 November.

It was on this same day, as talks were taking place, that the then justice minister Dermot Ahern appeared on RTÉ's The Week in Politics programme to describe reports of such talks as 'fiction'.

The Governor of the Central Bank, Patrick Honohan, has said that the reason that he decided to announce that billions of euro in financial aid would be drawn down by the government was because he felt the Irish public needed to know.

He said there appeared to be considerable public anxiety about what was going on and he felt he should tell people what he knew.

Mr Honohan said he did not discuss his decision to break the silence with any members of the government and that he operated independently of them.

Mr Lenihan said there was now a risk that the Irish public could become Euro-sceptic. He said he felt the ECB was giving the money with one hand while saying on the other hand that it did not really like doing it.

He said it would have been better for the ECB to say it was going to stand behind Ireland rather than engaging in a language of panic. 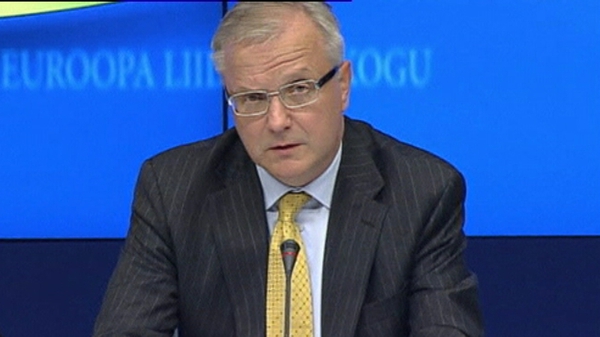