The world's richest countries have agreed on a set of guidelines aimed at preventing future financial crises.

The plan, agreed by finance ministers of the G20 leading economic powers, is designed to identify countries whose policies could put the global economy at risk if left unchecked.

The ministers hope it will prevent the types of dangerous imbalances widely believed to have contributed to the worst global financial downturn in 70 years.

One potential shortcoming is that countries will not be bound to follow any recommendations that emerge.

Others could face scrutiny as well if their policies are found to be stoking global risks.

‘The net is a little bit tighter for those countries that are considered of systemic importance,’ Ms Lagarde, who chaired the meeting, said.

France is president of the G20 this year.

Countries representing more than 5% of the combined output of the G20 will be examined by the IMF under the deal.

The list would include the debt-burdened United States and export-rich China - the two main economies at the heart of the debate over global imbalances. France, Britain, Germany, Japan and India would round out the list, officials said.

‘Our aim is to promote external sustainability and ensure that G20 members pursue the full range of policies required to reduce excessive imbalances,’ G20 finance officials said in a communique issued at the close of a full-day meeting. 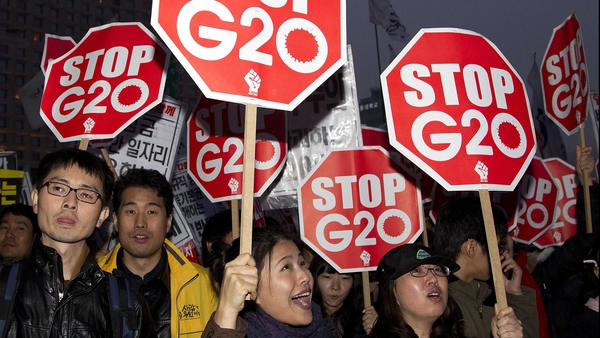