Prince Albert II of Monaco and his fiancée Charlene Wittstock are hosting a reception at Farmleigh tonight, to mark the last evening of their State visit to Ireland.

President Mary McAleese and her husband Martin attended the event, as well as up to 70 guests.

A group of students and musicians from Monaco performed at the reception.

Prince Albert visited several sites in Dublin on the second day of his three-day State visit to Ireland.

The prince also met Minister for the Environment Phil Hogan at his department this afternoon.

Earlier, the prince was welcomed at Trinity College by Provost Dr John Hegarty and went on to view the Book of Kells.

He announced the establishment of The Princess Grace Research Fellowship at Trinity.

The post-doctoral research fellowship is for one year and has been privately funded. It will continue on a bi-annual basis in different subject areas.

Prince Albert and Ms Wittstock also met Lord Mayor of Dublin Gerry Breen at City Hall, where they were presented with two sculptures by Irish designers.

Tomorrow, Prince Albert and Ms Wittstock will travel to the west where they will visit Co Mayo, the ancestral home of Albert's great-grandfather. 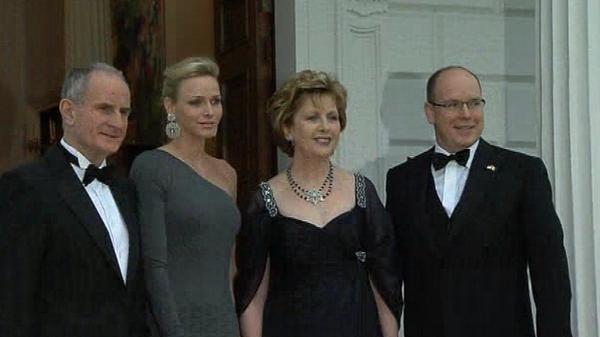