A motion calling on Independent TD Michael Lowry to voluntarily resign his membership of Dáil Éireann has been passed without a vote.

The all-party motion noted the final report of the Moriarty Tribunal, and said the conduct set out in the report was 'completely unacceptable for a member of the House'.

It had been planned to pass the motion without a debate, but at the insistence of Ceann Comhairle Sean Barrett, who was concerned about natural justice, Deputy Lowry was given 30 minutes to respond.

The Tipperary North TD took just eight minutes to reiterate that he would continue serving his constituency as he had done nothing wrong.

Deputy Lowry appealed to the Tánaiste to ensure that quick decisions are made by the gardaí and the Director of Public Prosecutions on whether any charges would arise from the report.

He also said he would 'take no lectures from Sinn Féin' on his behaviour, as that party had been associated with atrocities, mutilations and the murder of unarmed gardaí.

He said comments by Deputy Mary Lou McDonald made him 'retch'.

And he accused Fianna Fáil of hypocrisy, saying it had been exposed in last night's debate by Minister Pat Rabbitte in what he described as 'one of the best bushwhackings I have seen'.

He said Micheál Martin's 'Steve Silvermint' image would not last, and when the wrappers came off he and Fianna Fáil 'will not be smelling of mint'.

Deputy Lowry told the Dáil that he had not sought the right-of-reply, but was informed of it just ten minutes before the Dáil resumed this morning.

The deputy asked for confirmation from the Ceann Comhairle that the motion would not infringe on his rights or entitlements as a member of the Dáil.

The opposition parties all objected to the fact that Deputy Lowry was given an opportunity to speak on the motion.

It had originally been planned that the motion would be taken without debate.

Mr Barrett said there was an obligation to ensure natural justice was done and an opportunity was afforded to Mr Lowry to respond to the motion if he so desired.

Tánaiste Eamon Gilmore said he agreed that Deputy Lowry be given time to talk on the matter.

Sinn Féin's Mary Lou McDonald said it was fairly scandalous that Deputy Lowry would be given a 30-minute speaking slot, while Fianna Fáil leader Micheál Martin said he was surprised at the move.

Independent Deputy Catherine Murphy said TDs were categorically told that the motion would be taken without debate.

Earlier, Minister for the Environment Phil Hogan said he would vote with the Dáil motion of the censure of Mr Lowry.

He said the Government had decided to accept the findings of the Moriarty Tribunal report and the matters contained in it are very serious.

He would not say whether he thought Mr Lowry should resign, but said that the contents of the report were being dealt with by the gardaí and the Director of Public Prosecutions.

Minister for Social Protection Joan Burton said Mr Lowry needs to ‘reflect on his position’ following the all-motion which she said ‘represents people all around the country who see what has happened in the destruction of the economy’.

Arriving for today's Dáil session, Minister Burton said Judge Michael Moriarty's work had uncovered something that was ‘part of a culture that helped bring our banking and our economy down’. 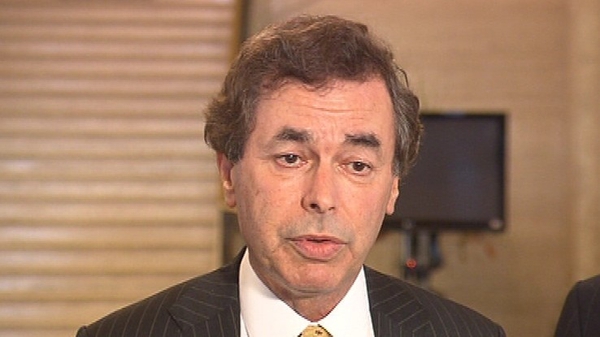