Mr Koussa, who was flown into an RAF station in Hampshire last night, said he no longer wished to service the Libyan government.

At a news conference in London, Mr Hague said Mr Koussa had not been offered any immunity from British or international prosecution, adding that Gaddafi must be asking himself who will be the next to abandon him.

‘He (Koussa) said that he is resigning his post. We are discussing this with him. We encourage those around Gaddafi to abandon him,’ Mr Hague said.

‘His resignation shows that Gaddafi's regime, which has already seen significant defections to the opposition, is fragmented, under pressure and crumbling from within,’ Mr Hague added.

Noman Benotman, a friend and analyst at Britain's Quilliam think tank, said Mr Koussa had defected because he opposed government attacks on civilians.

Mr Koussa, Western-educated and English speaking, was involved in talks that led to the Libyan convicted of the 1988 bombing of an airliner over Lockerbie in Scotland, Abdelbaset Ali al-Megrahi, being released from a British jail.

Earlier, a Libyan government spokeman dismissed reports that Mr Koussa had defected, saying he had been given permission to travel to neighbouring Tunisia to undergo urgent medical treatment.

'As far as we know Mr Moussa Koussa asked the government for permission to rest because he is a very, very ill person,' Mussa Ibrahim told Reuters news agency.

'The government gave him permission so he went to Tunisia to rest for a few days, possibly even for a few weeks and receive some urgent medical treatment.

'He has not notified us of any position different from his previous position.'

However, this afternoon the Libyan government has confirmed that Mr Koussa has resigned.

Elsewhere, the White House has declined to comment on reports that President Barack Obama has authorised covert US support for opposition forces in Libya.

Mr Obama has said, only, that he is considering arming rebel groups.

Reuters said it had been told by US government sources that Mr Obama had signed an order known as a presidential finding in the past two or three weeks.

Such findings are a principal form of presidential directive used to authorise secret operations by the US Central Intelligence Agency.

US Defense Secretary Robert Gates today declined to comment on any CIA activities in Libya, but assured Congress there would not be any US military 'boots on the ground' in Libya.

'I can't speak to any CIA activities but I will tell you that the president has been quite clear that in terms of the United States military there will be no boots on the ground,' Mr Gates told lawmakers at a hearing on Libya operations.

Meanwhile, domestic pressure is growing on the Obama administration after a new poll yesterday found nearly half of Americans were opposed to US military involvement in Libya.

The Quinnipiac University survey found most voters were confident the US mission to shield civilians from Gaddafi could succeed, though there was an undercurrent of concern about a long engagement, with 47% to 41% opposed to US involvement in Libya. 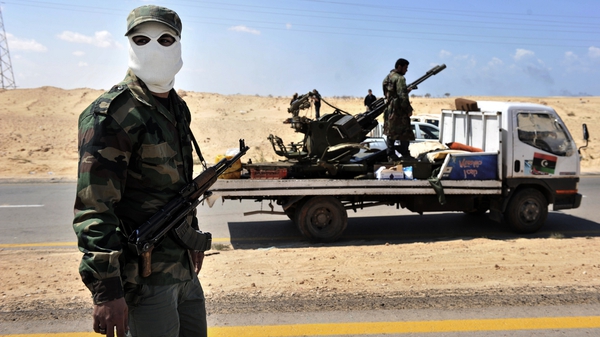