US President Barack Obama warned Libyan leader Muammar Gaddafi to comply with UN demands for a ceasefire or else face consequences that include military action.

He said Gaddafi must stop advances on the rebel capital of Benghazi.

‘All attacks against all civilians must stop,’ Mr Obama said in a White House speech.

Mr Obama, offering his first justification to Americans for getting the US military involved in Libya, said the goal is to protect Libyan citizens from what he called Gaddafi's campaign of repression against his people.

And he said the US role would be limited.

‘The United States is not going to deploy ground troops into Libya and we are not going to use force to go beyond a well-defined goal, specifically the protection of civilians in Libya,’ he said.

Mr Obama said Gaddafi has been given ample warning to stop attacking his own people but has ignored international demands.

Left unchecked, he said, there is every reason to believe Gaddafi would commit atrocities and many thousands could die.

‘The United States did not seek this outcome. Our decisions have been driven by Gaddafi's refusal to respect the rights of his people and the potential for mass murder of innocent civilians,’ he said.

Mr Obama said US Secretary of State Hillary Clinton would travel to Paris tomorrow to attend an international meeting on the Libyan crisis to discuss the next steps following approval yesterday of a UN Security Council resolution on Libya.

However, the insurgents dismissed it as a bluff and Washington demanded action, not words.

The rebels also said they were coordinating with Western nations eventual air strikes against Gaddafi's forces.

A coalition of countries is gearing up to launch attacks after the UN approved action to stop Gaddafi from crushing the insurgency.

Earlier, Foreign Minister Mussa Kussa said 'Libya has decided an immediate ceasefire and an immediate halt to all military operations.'

The Security Council voted yesterday to permit 'all necessary measures' to establish a no-fly zone, protect civilian areas and impose a ceasefire on Gaddafi's military.

Resolution 1973 'demands the immediate establishment of a ceasefire and a complete end to violence and all attacks against, and abuses of, civilians.'

Mr Kussa said Libya, as a member of the United Nations, was 'obliged to accept the UN Security Council's resolutions.'

But only hours earlier, Gaddafi told Portuguese television the council had 'no mandate' for such a resolution, 'which we absolutely do not recognise.'

'Until this moment he is still attacking places that are under siege.'

He said there was 'sustained shelling' in Zintan, Ajdabiya and Misrata.

'There is coordination with the different international bodies for the action to be taken and some places have already been specified,' Sayeh of the rebels' military council told reporters in the rebel-held city of Benghazi.

A Libyan military source in Tripoli said the 'armed forces are respecting the announced ceasefire and the commitment to protect civilians, and have not carried out any military operations' since the announcement.

'All the world knows that Muammar Gaddafi is a liar,' he said. 'He and his sons, and his family, and all those with him are liars.'

US Secretary of State Hillary Clinton said reports of a ceasefire would be judged on 'action' not words.

'This is a fluid and dynamic situation. We are going to be not responsive or impressed by words.

'We would have to see actions on the ground,' Mrs Clinton said.

She said the United States and its allies were still considering what would be 'the most effective measures' to end the crisis and repeated calls for Gaddafi to go.

Meanwhile, NATO said it was discussing its eventual role in enforcing the resolution.

The Arab League announced a high-level meeting with the European Union and African Union in Paris tomorrow, with UN chief Ban Ki-Moon attending.

So far Belgium, Britain, Canada, France, Italy, Norway, Spain, Sweden, Qatar and the US have said they will help to implement the no-fly zone.

French government spokesman Francois Baroin said today, before the ceasefire announcement, that strikes would come 'rapidly... within a few hours.' 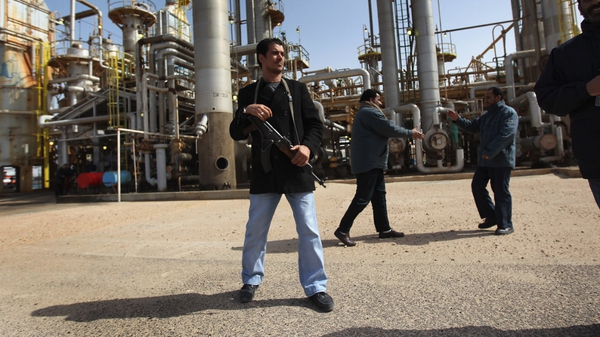