Bahraini police have crushed the camp in Manama of a month-old pro-democracy protest in an operation that left five dead and sparked Shia outrage across the region.

The violence prompted US President Barack Obama, whose country is a close ally of Bahrain, to express 'deep concern'.

His Secretary of State said the deployment of Gulf troops to quell political unrest was the wrong response.

Early today, hundreds of riot police backed by tanks and helicopters assaulted demonstrators in Manama's Pearl Square, clearing the symbolic heart of the uprising in the Gulf kingdom.

The Shia opposition, which has been the backbone of protests demanding political change, said three demonstrators were killed in the raid.

The violence came a day after King Hamad declared a three-month state of emergency in his Sunni-ruled state.

The king is supported by troops who arrived on Tuesday along with armoured vehicles from Saudi Arabia and the United Arab Emirates.

In the wake of the violence, Mr Obama telephoned King Hamad and King Abdullah of Saudi Arabia to express 'deep concern', stressing the need for 'maximum restraint' and 'importance of a political process', his spokesman said.

US Secretary of State Hillary Clinton criticised the Gulf deployment, in remarks to journalists in Cairo.

She said it was 'the wrong track. And we believe that a long-term solution is only possible through a political process.'

'What is happening in Bahrain is alarming, and it is unfortunately diverting attention and effort away from the political and economic track. That is the only way forward to resolve the legitimate differences of the Bahrainis themselves.'

Protests and gatherings have been banned and a dusk-to-dawn curfew is in operation in the business district, which had been under the protestors' control for three days.

Shia villages around the city remained cut-off by the security forces and phone lines were down. A curfew was announced in central Manama from 4pm to 4am. 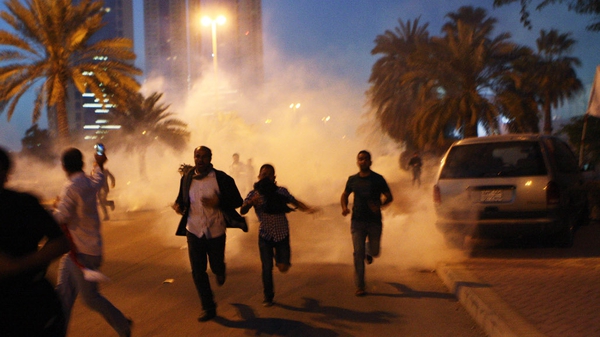