Libyan tanks have again fired on rebel positions in the oil port of Ras Lanuf as Muammar Gaddafi's forces carry their counter-attacks deeper into rebel-held territory.

Earlier this afternoon, State television claimed that the army had driven rebels out of Ras Lanuf - a claim that was swiftly denied by a spokesperson from the rebel National Libyan Council.

The rebels took an important step toward international legitimacy when France recognised their national council earlier, but NATO and the EU are still discussing what measures they will take.

Despite appeals to take air power away from Gaddafi's forces, no quick action is expected as NATO leaders want broader UN endorsement for political cover.

Establishing a no fly zone would be an act of war as it would require knocking out Libya's air defence system. Libya's is the second largest in the Middle East, with 31 major surface-to-air missile sites.

As fighting continues, the town of Tas Lanuf has been bombarded from land, sea and air throughout the day.

State forces - including warplanes and gunboats - attacked the area, which lies more than 500km east of Gaddafi's stronghold in Tripoli.

Rebel fighters said Ras Lanuf's residential district, including the vicinity of its hospital, came under severe bombardment earlier and one said government forces were advancing into the area, backed by rocket fire from gunboats.

Witnesses said at least two tanks were seen bearing down on ragged rebel lines outside Ras Lanuf and opening fire.

Insurgents also reported an air strike on Brega, another oil port 90km east of Ras Lanuf, indicating that Gaddafi loyalists had not only halted a westwards insurgent push in its tracks but were making inroads into their eastern hinterland.

Meanwhile in Zawiyah, like in many other areas, the number of those killed in almost a week of heavy fighting remains unclear.

A Reuters correspondent in the city said residents had taken advantage of a recent lull in fighting to check on family and friends and bury the dead.

Libyan officials took foreign journalists on a trip to Zawiyah late yesterday, but only as far as a stadium outside the town where they watched pro-Gaddafi celebrations and food being distributed to local people.

NATO Secretary-General Anders Fogh Rasmussen has said that there was a risk that Libya could become a divided, failed state that could be a haven for terrorists.

Mr Rasmussen did say NATO plans to move more ships to the Mediterranean in response to the crisis. But he cautioned that more planning was needed on a possible 'no fly' zone.

The Pentagon said it was preparing a 'full range' of military options for Libya, including a no-fly zone.

Rebel forces have appealed to the US and its allies to impose a no-fly zone to deny Gaddafi's forces the advantage of using warplanes and prevent him moving troops by helicopter.

Separately, the British Foreign Office has condemned the ill-treatment of three BBC journalists in Libya by forces loyal to Gaddafi.

The three, who are part of the corporation's Arabic service, were arrested at a checkpoint in Zawiyah three days ago.

They were taken to the capital where they suffered repeated assaults and were subjected to a mock execution before their release 21 hours later.

One of the journalists, Feras Killani, said he had witnessed captured rebel fighters being held at the location who had also been tortured. 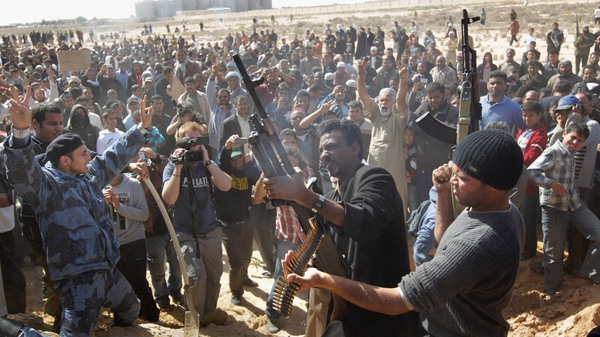