Foreign powers have accelerated efforts to help oust Libyan leader Muammar Gaddafi as rebels fought government forces trying to take back strategic coastal cities on either side of the capital Tripoli.

‘All my people love me,’ Gadaffi insisted, ignoring mounting global pressure to step down and perhaps head into exile after four decades at the helm of his country.

‘They love me. All my people with me. They love me all. They would die to protect me,’ the veteran Libyan leader said, speaking in halting English in an interview with Western media shown on the BBC's world news website.

‘No demonstrations at all in the streets,’ claimed Kadhafi, who has ruled his north African country for more than 41 years. ‘No one is against us, against me for what?’

Those remarks and the Libyan leader's callous lack of concern for the plight of his people were roundly condemned by US ambassador to the United Nations Susan Rice.

‘It sounds just frankly delusional, when he can talk and laugh to an American and (an) international journalist while he is slaughtering his own people,’ Rice said at the White House. ‘It only underscores how unfit he is to lead and how disconnected he is from reality.’

Kadhafi sat down in Tripoli for the interview with ABC television channel as well as the BBC and The Times of London as world powers ramped up pressure on his regime.

Gaddafi's forces have been trying for days to push back a revolt that has won over large parts of the military, ended his control over eastern Libya and is fending off government assaults in western cities near Tripoli.

It is difficult for reporters to move around western Libya and reports of fighting were hard to verify independently.

But witnesses in both Misrata, a city of a half a million people 200km to the east of Tripoli, and Zawiyah, a strategic refinery town 50km to the west, said government forces were mounting repeated attacks.

‘An aircraft was shot down this morning while it was firing on the local radio station. Protesters captured its crew,’ a witness in Misrata, Mohamed, told Reuters by telephone.

‘Fighting to control the military air base started last night and is still going on. Gaddafi's forces control only a small part of the base. Protesters control a large part of this base where there is ammunition.’

A resident of Zawiyah, called Ibrahim, told Reuters by telephone: ‘We are expecting attacks at any moment by brigades belonging to (Gaddafi's son) Khamis. They are on the outskirts of the town, about 5-7 km away. They are in large numbers.’

In the capital, Gaddafi's last stronghold, a Reuters reporter saw about 400 people protesting in a square in the Tajoura district, an area already partly outside his control.

Soon after, men in sports utility vehicles pulled up and fired into the air in an attempt to disperse the protest.

Foreign governments are increasing the pressure on Gaddafi to leave in the hope of ending fighting that has claimed at least 1,000 lives and restoring order to a country that accounts for 2% of the world's oil production.

The UN Security Council imposed sanctions on Gaddafi and other Libyan officials and imposed an arms embargo and froze Libyan assets on Saturday.

In The Hague, the International Criminal Court prosecutor said he would finish a preliminary examination of the violence within days, after which he could open a full inquiry - a step mandated by the Council that could have taken months.

France has proposed an emergency summit of EU leaders for Thursday.

In an address to the U.N. Human Rights Council in Geneva, US Secretary of State Hillary Clinton said Gaddafi was using ‘mercenaries and thugs’ to suppress his own people and said the Libyan leader must step down immediately.

‘Gaddafi and those around him must be held accountable for these acts, which violate international legal obligations and common decency,’ Clinton said, adding that nothing was off the table as the international community considers its next steps.

An Irish woman and her five daughters have returned to Baldonnel tonight from Libya.

Kaye Featherston, who is an English Teacher, came back on the Air Corp's Gulf Stream with her daughters.

Her husband Faisal, a flight engineer, and son are still in Benghazi, Libya. The family has been living in Libya for 23 years.

Kaye and her daughters travelled from Benghazi to Malta by boat early yesterday, and left Malta today with the Dublin based members of Evacuation Team, who also arrived back on tonight's flight.

The Director of Operations from Mercury Engineering also came back with them, he was working as the lead coordinator in Tripoli, evacuating the company's workers from the desert.

The other Air Corp jet, The Casa, is likely to come back from Malta tomorrow.

The Department of Foreign Affairs says all Irish citizens looking to get out of Libya are out.

A very small number remain in Libya and they are all long term residents.

The Department of Foreign Affairs is in daily contact with those people, and their families here.

A humanitarian crisis is developing on Libya's border with Tunisia - with aid workers saying it is being overrun with migrants fleeing the turmoil in Libya.

About 30,000 refugees - many of them Egyptians - are stranded and need food and shelter, with many forced to sleep in the open despite the cold.

The UN estimates that about 100,000 people have fled the unrest over the past week. 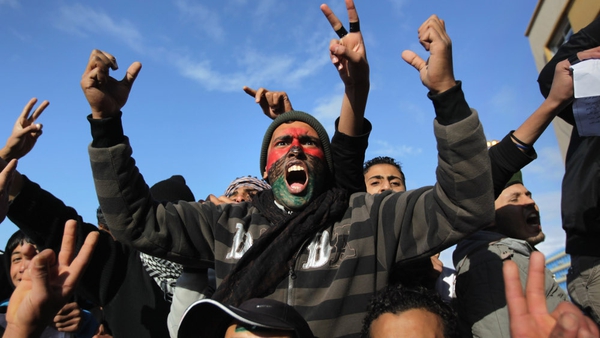 Gaddafi on the brink as Libyan rebels advance News