The Department of Foreign Affairs has said an Aer Corps flight from Tripoli has touched down at Valetta in Malta.

It is understood the plane had clearance to land at Tripoli but left the airport without any passengers on board.

The Department says it was not possible to communicate with the flight when it was on the ground in Tripoli and it is awaiting a debriefing from the crew.

The aircraft is one of two Air Corps planes which had been sent in an attempt to bring home Irish citizens from Libya as protests against Muammar Gaddafi intensify.

The operation is one of many being taken by Governments around the world concerned for the safety of their citizens in Libya.

The Defence Forces are liaising with the Department of Foreign Affairs (DFA) regarding the operation.

The DFA has said there are no reports of any Irish deaths in Libya.

A Learjet 45 and a Casa patrol plane were on stand by in Malta since last night for a possible evacuation of about 40 Irish people from Libya.

Experts will now draw up a list of proposed measures, which could include visa bans, asset freezes, an arms embargo and other restrictions, before EU governments agree when to impose them.

Popular protests in Libya's neighbours Egypt and Tunisia have toppled entrenched leaders, but Gaddafi said he would not be forced out by the rebellion.

‘This is my country, my country,’ he said in a speech on national television yesterday. ‘I will fight to the last drop of my blood.’

Mr Gaddafi said he would ‘die a martyr in the land of my ancestors’ and urged his followers to demonstrate their support.

‘Capture the rats,’ he said of anti-regime demonstrators. ‘Go out of your homes and storm them.’

In New York, the UN Security Council has condemned the use of violence and called for those responsible for attacks on civilians to be held to account.

A government spokesman accused international media of exaggerating the gravity of the situation in the country.

But swathes of Libya are no longer under government control.

In Sabratah, 80 km west of the capital, the Libyan army has deployed a 'large number' of soldiers after protestors destroyed almost all the security services offices.

Rebel soldiers in eastern Libya say the city of Tobruk is no longer under Gaddafi's control.

Tobruk residents said the city had been in the hands of the people for three days. They said the smoke rising above the city was from a munitions depot bombed by troops loyal to one of Gaddafi's sons.

Human Rights Watch says 62 people have died in clashes in Tripoli in the past two days, on top of its previous toll of 233 dead. 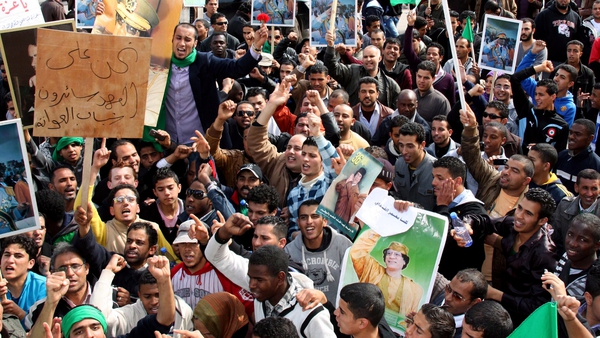