More than 60 people have been wounded after Bahraini security forces fired on protestors near Pearl Square today, a senior medical official said, a day after police forcibly cleared a protest camp in the capital.

Bahraini King Hamad bin Isa al-Khalifa announced he had asked the crown prince to start a national dialogue ‘with all parties’ to resolve the crisis rocking the island kingdom.

Ali Ibrahim, deputy chief of medical staff at Salmaniya hospital, said 66 wounded had been admitted from the clash at Pearl Square in the capital. Four were in a critical condition.

The injuries were worse than those yesterday, he said.

Today’s shooting occurred on a day of mourning when Shias buried four people killed a day earlier in the police raid on the Pearl Square traffic circle.

‘We think it was the army,’ former lawmaker Sayed Hadi said of the shooting.

He is a member of Wefaq, the main Shia bloc, which resigned from parliament yesterday.

‘I respect Wefaq, as I respect others. Today is the time to sit down and hold a dialogue, not to fight,’ he said.

About 1,000 people gathered outside one hospital, some spilling into the corridors as casualties were brought in, including one with a bloody sheet over his head. Some men wept.

Fakhri Abdullah Rashed said he had seen soldiers shooting at protestors in Pearl Square. ‘I saw people shot in several parts of their body. It was live bullets,’ the protestor added.

Another Wefaq MP, Jalal Firooz, said demonstrators had been holding a memorial for a protestor killed earlier this week when riot police fired tear gas at them. Police had no comment.

The crowd then made for Pearl Square, where army troops opened fire, Mr Firooz said.

Four people were killed and 231 wounded when riot police raided the protest camp in the early hours of yesterday morning.

Bahrain's most revered Shia cleric, Sheikh Issa Qassem, described the police attack as a 'massacre' and said the government had shut the door to dialogue.

He was speaking to those gathered for Friday prayers at a mosque in a Shia village in the northwest of the island.

Thousands joined funeral processions in the village of Sitra, south of Manama, for three of the dead.

'The people want the fall of the regime,' they cried.

On Tuesday, one protestor was killed at the funeral of another.

The mostly Shia protestors had hoped to turn Pearl Square into a base modelled on Cairo's Tahrir Square, the centre of the protests that toppled Egyptian President Hosni Mubarak.

Bahrain is ruled by a Sunni Muslim king and his family, but Shias form 70% of Bahraini nationals and they want more say in how the country is run.

Foreign Minister Sheikh Khaled bin Ahmed al-Khalifa said police action pulled Bahrain back from what he called the brink of a sectarian abyss.

'Bahrain is a friend and an ally and has been for many years,' US Secretary of State Hillary Clinton said.

‘We call on restraint from the government (and) to keep its commitment to hold accountable those who have used excessive force.' 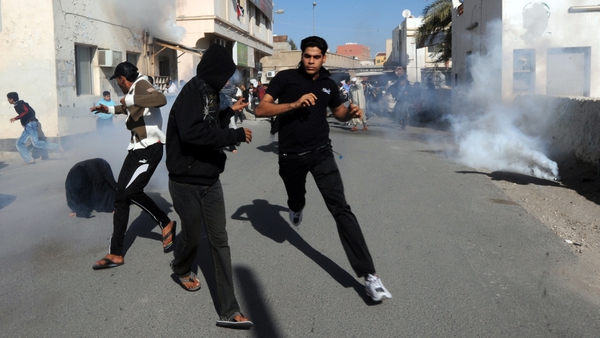