The second televised debate of the General Election campaign has taken place.

The leaders of Fianna Fáil, Fine Gael, the Labour Party, the Green Party and Sinn Féin answered questions on topics including the economy, health care and political reform.

Read the RTÉ Leaders' Debate - As it Happened

On spending cuts, the leaders of Fine Gael and Labour, Enda Kenny and Eamon Gilmore, said that everyone would suffer, while Fianna Fáil’s Micheál Martin said there was no painless way to cut back on public expenditure.

Green Party leader John Gormley said people at the higher end, who could afford it, would suffer from the cuts.

On job creation, Eamon Gilmore said Labour would establish a jobs fund to get people back to work.

Micheál Martin said an export-led recovery was needed, saying that governments don’t create jobs, but that they can create the environment for job creation and incentivise.

John Gormley said Ireland needed to play to its strengths, adding that education was vital.

Some of the sharpest exchanges of the night were between Enda Kenny and Eamon Gilmore.

The other main flashpoint was between Micheál Martin and Gerry Adams.

Tonight's debate was the only televised debate for Mr Adams and Mr Gormley.

Two more debates between the leaders of Fine Gael, Labour and Fianna Fáil are scheduled before polling day.

Mr Kenny said he raised the issue of Ireland's corporation tax rate, the interest rates on the EU/IMF deal and the question of burden sharing among senior bondholders in the Irish banking sector.

Mr Kenny said Chancellor Merkel had been extremely well briefed on all aspects of the Irish economy.

He outlined his proposal at a briefing organised by the Dublin Web Summit this morning.

The Labour Party launched its plan for jobseekers at a news conference in Dublin, while Sinn Féin launched its health policy document on Kildare Street in Dublin. 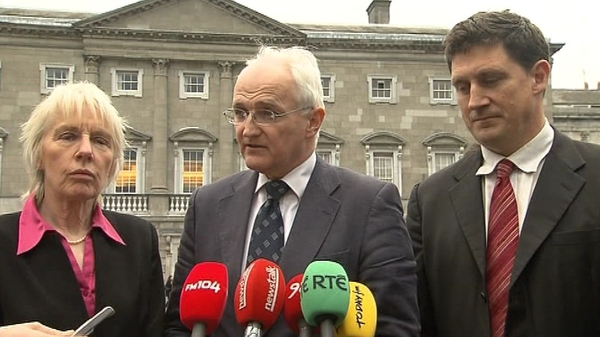