Mr Kenny made the announcement on RTÉ's This Week programme.

Mr Kenny said that a credible outcome of a renegotiation of the EU/IMF rescue package would be to reduce the cost of the deal for Ireland.

He said it would be absurd that Irish taxpayers would be asked to pay 100% of the cost without bondholders been asked to share the burden.

Meanwhile, Labour Party leader Eamon Gilmore has questioned whether the electorate wanted a single-party government were Fine Gael able to form one.

Speaking as his party launched the plans for radical political reforms, Mr Kenny said: 'We are working on getting the maximum response from the people'.

The political reforms announced by Fine Gael include a referendum to be held within 12 months on what they're dubbing 'Constitution Day' when votes will be held on abolishing the Seanad, reducing the number of TD's by 20, cutting the President's term from seven to five years and giving the Oireachtas power to cut judges' pay.

Mr Kenny has said he and his party are 'not going to be distracted by a poll' and that 'there will be no complacency by Fine Gael'.

He was reacting to the latest polls that showed Fine Gael on track for the possible formation of a single-party government.

Mr Gilmore has said not a single vote has been cast in the general election and no one should make presumptions about what voters are going to do on the basis of the latest opinion poll.

He said there will be people in Fine Gael who are now contemplating the prospect of forming a single-party government but he added he was not sure if that was what people wanted.

The Labour Party has launched its plan for 'sporting communities'.

The party plans to will establish a Community Development Fund for amenities and prioritise capital spending in multi-use facilities under 'The National Sports Facilities Strategy'.

It also plans to introduce a betting levy of 1.5%, extended across all media and on-course transactions.

Meanwhile, Fianna Fáil leader Micheál Martin is campaigning in Cork while the Green Party was set to highlight proposals to allow same-sex marriage.

The Workers' Party has launched their manifesto. In it they say they will 'completely change the political system which they believe has allowed corruption, cronyism and economic ruin to flourish'.

It says it will not participate or support any government led by Fianna Fáil or Fine Gael.

Launching its education manefesto this morning, Sinn Féin's Aengus Ó Snodaigh has said the party is committed to a 'proper and free education system.

The party says it will commit itself to end the system where schools are reliant on voluntary contributions from parents by raising capitation grants.

Fianna Fáil are already accusing Fine Gael of arrogance and taking the public for granted, but the latest Red C poll in this morning's Sunday Business Post does put Fine Gael in striking distance of forming a government on its own - party support is up three points in a week to 38%. 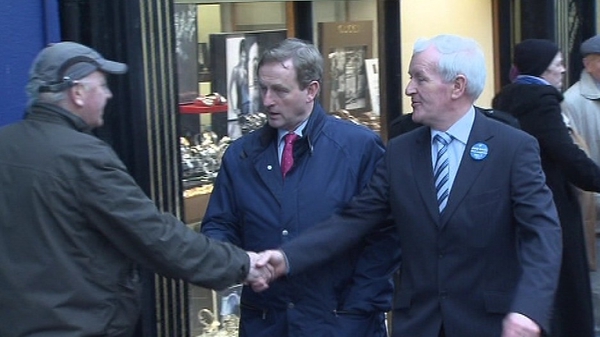