A total of 564 candidates will be contesting the General Election - nearly a hundred more than in the last general election in 2007.

The number of those running as independents or for smaller parties is 233 - this compares to 108 in 2007.

The Green Party is fielding 43 candidates. Sinn Féin is running 41 candidates, the same number of candidates as 2007.

There is a very high number of other parties and independent candidates this year.

Nominations may have closed but candidates can withdraw their names up to midday tomorrow.

These recent figures do not include additions to the Supplementary Register.

Since its foundation in 1926, Fianna Fáil has always fielded enough candidates to give a majority in the Dáil if they were all elected.

The last time Fine Gael had more General Election candidates than Fianna Fáil was in 1969, when they had 125 compared to 122.

It is also the highest recorded level of Independent and minor party candidates - the next highest was in 1992, when there were 186 recorded under ‘Other’ in the official results, made up of 103 Independents, 5 Christian Centrist, 19 Green, 41 Sinn Féin, and 18 Worker’s Party.

As Fine Gael leader Enda Kenny spent the evening in Carrick-on-Shannon at what was billed as a 'town hall meeting', Mr Gilmore and Mr Martin were going head-to-head on TV3 in the first televised leaders' debate of the campaign.

They disagreed on a range of issues including tax, the bank guarantee, renegotiation of the IMF/EU deal, and political reform.

Attacking the Labour Party's plan aimed at getting the public finances back in order, Mr Martin said it represented a policy of higher taxes and increased borrowing.

Both participants later declared themselves satisfied with their individual performances and with the one-to-one format of the programme.

Mr Kenny had travelled to Carrick-on Shannon in Co Leitrim for a public meeting that was attended by around 300 people.

On his arrival, he told reporters that while he believed televised debates were important - they were not the single issue.

He said he was looking forward to participating in three televised debates during the rest of the election campaign. 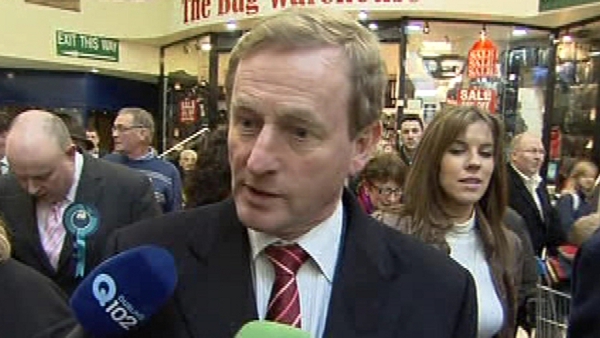