Labour leader Eamon Gilmore has said he would welcome a three-way debate at TV3 next Tuesday and urged Fine Gael leader Enda Kenny to attend.

Both Fianna Fáil and Labour have agreed to take part in the debate.

However, Mr Kenny has baulked at the presence of journalist Vincent Browne as one of the moderators.

Responding to questions this morning about a vacant seat at the TV3 debate, Mr Kenny said 'it would stand as a symbol to those forced to emigrate' in recent years.

He said their voice would be heard loudly at the five-way debate planned for RTÉ.

However, Mr Browne has said he will step aside as moderator of a three-way leaders' debate if Mr Kenny agrees to take part.

Speaking on his own television programme last night, Mr Browne said he would step aside to allow TV3 Political Editor Ursula Halligan chair the debate if Mr Kenny agreed to take part.

The station would only confirm that it had sent invitations to party leaders to participate in two debates, in five-way and three-way format.

Meanwhile, Sinn Féin TD Aengus Ó Snodaigh has said the farcical debate about the election leaders' debate was a 'joke' and underlines all that is wrong with Irish politics.

Mr Ó Snodaigh said people would find it 'sickening' that leading politicians are consumed with this rather than serious issues, such as thousands of people losing jobs and thousands more being forced to emigrate.

The latest opinion poll shows Fine Gael still maintaining a commanding lead over other parties, with Labour in second place and Fianna Fáil in third.

Meanwhile, Mr Gilmore said voters in this election would choose whether or not they wanted a party in power who would renegotiate the EU/IMF deal.

He criticised the Government's handling of the economic crisis and said he would have pursued different ways of dealing with banks, such as introducing temporary public ownership of them, when details of the crisis first began to emerge.

He criticised Fianna Fáil's decision to introduce the bank guarantee which, he said, was supported by Fine Gael, Sinn Féin and the Greens.

He said he was open to any measure that would help those in mortgage difficulties, but said there were problems in Fine Gael proposals outlined yesterday.

Mr Gilmore said not everybody who is in trouble with their mortgage bought their home between 2004 and 2008.

On the suggestion that mortgage interest relief for first-time buyers should be abolished, Mr Gilmore said he thought it was probably unfair to ask somebody’s younger sister to pay for the mortgage problems of their older brother.

Richard Bruton gave details of their plans to halve the cost of ministerial cars by pooling them.

The party also plans to reserve at least one third of all senior appointments in the public service for outsiders.

If it takes office, Fine Gael will also be asking the directors of State boards to resign within six months, with all subsequent appointments of directors and CEOs subject to approval by a Dáil committee.

In a direct message to German Chancellor Angela Merkel and French President Nicolas Sarkozy, Mr Kenny said he had already made it perfectly clear to both that Ireland retained taxation decision making and it would be defended 'regardless of comments from abroad'.

Asked about the Fine Gael plan to remove interest relief for first time buyers in the current market in order to cover increased relief for those with negative equity, he said there is no point in robbing Peter to pay Paul and it is unfair to first time buyers. 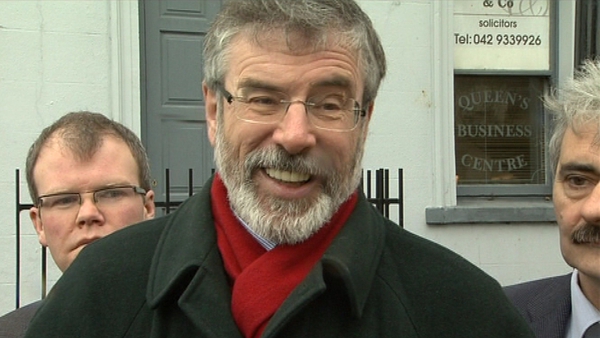