Three people have been killed and more than 600 injuredsupporters and opponents of Egyptian President Hosni Mubarak clashed in Cairo, according to the country's health ministry.

However, a doctor at an emergency clinic set up at the scene later estimated the injured to be more than 1,500.

Egyptian opposition figure Mohamed ElBaradei has accused the government of 'scare tactics' after the clashes.

Thousands of the president's supporters surged into Tahrir Square, dismantling barricades set up by demonstrators.

Rival camps are reported to have fought hand to hand, and with sticks and stones.

Earlier, an opposition coalition called for the protests in Cairo's Tahrir (Liberation) Square to continue.

UN Secretary General Ban Ki-moon has said that any attacks on peaceful demonstrators in Egypt were 'unacceptable'.

'Any attack against the peaceful demonstrators is unacceptable and I strongly condemn it,' Mr Ban told journalists in London after talks with British Prime Minister David Cameron.

Mr Cameron condemned the 'despicable scenes' in the Egyptian capital and said any state sponsorship of the violence would be 'completely unacceptable'.

With Egyptian troops firing warning shots for the first time in a bid to end clashes between supporters of the regime and protestors, Mr Ban urged the Egyptian government to quickly bring in political change.

'It is important at this juncture that it is ensured that an orderly and peaceful transition should take place. I urge all the parties to engage in such dialogue and such process without any further delay,' he said.

Mr Ban said the UN was ready to provide 'any assistance' with pushing through political change.

Crowds gathered in the square this morning for a ninth day of protests, rejecting Mr Mubarak's promise yesterday that he would not stand in elections scheduled for September.

Meanwhile, the European Union has called Mr Mubarak's decision not to stand for re-election a step in the right direction, but said his new cabinet did not constitute a representative government.

In a statement, EU foreign affairs chief Catherine Ashton also said the EU was ready to support the Egyptian people in their quest for a better future.

‘The EU is calling for an orderly transition through a broad-based government leading to a genuine process of substantial democratic reform with full respect of the rule of law, human rights and fundamental freedoms,’ she said.

‘Unfortunately, the appointed new cabinet does not constitute such a broad-based representative government.’

On Monday EU foreign ministers stopped short of calling for an immediate election in Egypt.

But they called for an orderly transition to a broad-based government, saying democratic reforms were needed to create the conditions for free and fair elections.

It is understood that tour operators are moving around 180 Irish tourists from the resort of Sharm El Sheikh.

The Department of Foreign Affairs has also said that nine Irish citizens are due to leave Egypt today on special flights organised by the British and Portuguese authorities.

The Irish Embassy in Cairo is in daily contact with around 200 Irish citizens registered as living in Egypt. 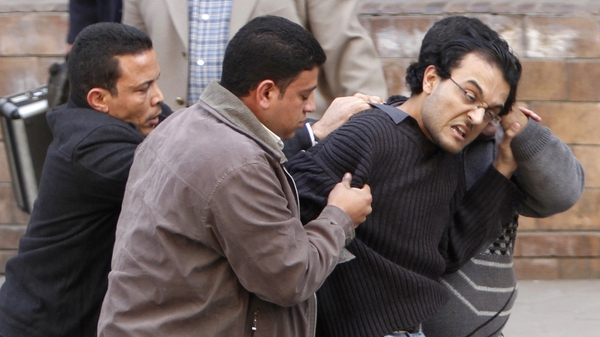