Fianna Fáil TD Niall Blaney has become the latest Dail deputy to announce he will not run in the General Election.

The deputy for Donegal North East cited ‘personal reasons’ for his decision.

Mr Blaney was first elected to the Dáil in 2002 for Independent Fianna Fáil but his organisation merged with Fianna Fáil in 2006.

Deputy Blaney is a son of former TD Harry Blaney and nephew of Neil T Blaney.

Deputy Blaney withdrew ahead of a Fianna Fáil selection convention for the constituency tonight.

Senator Cecilia Keaveney also stated before the convention that she would not be running.

Fianna Fáil TD for Cork North Central Noel O'Flynn announced earlier today that he will not be contesting the General Election.

Newly elected Fianna Fáil leader Micheál Martin confirmed he asked Cork Mr O'Flynn to consider not running for the sake of the party.

Speaking to RTÉ news this morning Deputy O'Flynn said he believed there would only be one seat for Fianna Fáil in his constituency.

Deputy O'Flynn, aged 59, has represented Cork North Central as a TD for the past 14 years.

He was outspoken in calling for former party leader Brian Cowen to resign.

Speaking in Cork, Mr Martin said that he had gone through the data for Cork North Central - now a four seat constituency - and having found that it would not be possible for them to elect two Fianna Fáil TDs in the constituency, asked Deputy O'Flynn to stand down and lend his full support to a younger candidate, former Minister of State Billy Kelleher.

Mr Martin said Deputy O'Flynn very generously agreed to do so in the interests of the party.

He described him as a good friend who had his own views and principles which he articulated independently and honestly.

Mr Martin said it was very difficult for him to ask this of someone of Deputy O'Flynn's fighting qualities.

Candidates may be added also to the tickets in Mayo and Donegal North East, a Fianna Fáil spokesperson said.

The only remaining selection convention is in the Taoiseach's constituency of Laois Offaly, which will take place on Tuesday night.

Fianna Fail leader Micheal Martin has said said the key to the election is substantial debates and he appealed to Fine Gael's Enda Kenny to ignore the advice he is getting and participate in the debates.

Asked about today's polls, he said 16% is not enough, but there are signs that Fianna Fáil can increase their position.

Asked about the support for him as the next Taoiseach, Mr Martin said one swallow does not make a summer. 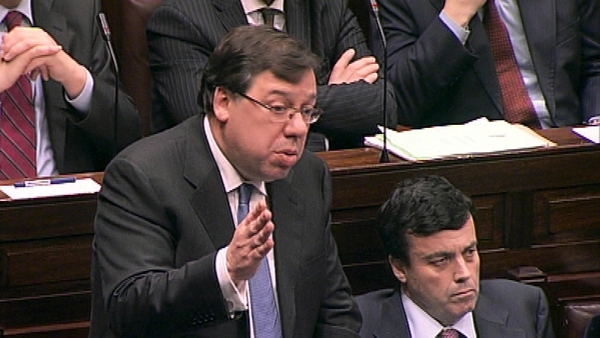 O'Flynn calls on Cowen to stand down