The newly elected leader of Fianna Fáil, Micheál Martin, has challenged Enda Kenny and Eamon Gilmore to take part in a series of political debates ahead of the General Election.

At a news conference, Mr Martin said there needed to be a determined approach to reforming politics and government.

After Mr Martin's election as party leader, the Taoiseach congratulated him on his victory and said he would offer whatever support he could to him.

Mr Cowen stood down as party leader on Saturday, after his attempted Cabinet reshuffle was blocked by the Green Party, which subsequently pulled out of Coalition Government.

Speaking in a Dublin hotel this afternoon, Mr Martin said empty slogans of the left and right will never deliver for the people of Ireland.

He said with the right policies, Ireland will and can come through the current crisis.

The Fianna Fáil leader said next week he would detail the policies and plans his party has for the future of Ireland.

Mr Martin said the electoral campaign would be an opportunity to listen to people and devise a plan on how to deal with the future and lead Ireland out of its current difficulties.

He said people needed to deal with real issues and not be concerned with polls. He said he did not expect an overnight success when it came to improving the Fianna Fáil positions in the polls.

Mr Martin said he would name a deputy leader 'shortly'.

But he said before the last election political parties were competing with each other on tax cuts and on who could spend the most, so in that sense 'we were all wrong'.

Mr Ó Caoláin said: 'Once again we have a Fianna Fáil leader engaged in the politics of exclusion and only willing to debate with parties from the consensus for cuts.'

The former Minister for Foreign Affairs was selected as the eighth leader Fianna Fáil by deputies at a meeting of the parliamentary party this afternoon.

The new leader said he was delighted with the result.

Mr Martin was seen as the front runner in the contest. The other candidates were Ministers Éamon Ó Cuív, Brian Lenihan and Mary Hanafin.

It is understood that Mr Martin was elected after three counts and that the runner up was Mr Ó Cuív.

Mr Martin is understood to have received 33 votes after the first count, Mr Ó Cuív received 15, Brian Lenihan had 14 and Mary Hanafin was on ten.

After Ms Hanafin's elimination and the distribution of her votes, Mr Lenihan and Mr Ó Cuív were level, but the Minister for Finance was eliminated on the basis of having had a lower first-count figure.

Taoiseach Brian Cowen has congratulated Mr Martin on his election and says he has his full support.

Mr Cowen said: 'I have told Micheál he has my full support in his new role and I wish him the very best in the immediate task of leading the party into the election.

'Micheál Martin is a politician of accomplishment and achievement and he has all the right credentials to be a very successful leader of our party.'

Mr Lenihan said Mr Martin was 'a highly experienced and capable politician', who has his full support as leader.

He added: 'We must now concentrate on the forthcoming election. Fianna Fáil will now unite behind the new leader and bring our case to the people.'

Fianna Fáil TD Billy Kelleher has called on the people of Ireland to row in behind the new leader of the party.

Speaking after the announcement, the Cork North Central TD said he is confident that his colleague will restore confidence in Fianna Fáil voters.

Mr McGrath said it represents a fresh start for the party and a tremendous opportunity for Fianna Fáil to go into the election with renewed enthusiasm.

Ahead of the vote, Mr Cowen said the party needed to remain united. His speech was given a standing ovation by those present. 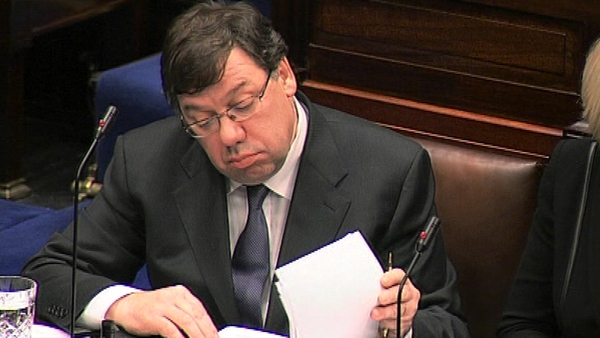