Aer Lingus has said it expects to operate its full schedule over the weekend, despite the cabin crew dispute.

However, a spokesperson was unable to confirm how many planes and crews the company is now hiring in from other carriers.

The workers presented a letter to Aer Lingus Chief Executive Christoph Mueller that they are ready, willing and able to work.

They said they cannot understand why he prefers to waste scarce company resources to hire in planes and crews when staff are reporting to duty every day.

In the letter, cabin crew said they remained loyal to Aer Lingus but were also 'loyal to each other and to our families whose quality of life we are trying to protect'.

The dispute over cabin crew rosters is in its fifth day.

In newspaper advertisements this morning, Mr Mueller apologises to customers for the disruption, but blames the cabin crew and its union IMPACT for the problem.

He says that in the coming days the airline will make every effort to minimise the disruption to passenger services by hiring in aircraft from other airlines.

Speaking on RTÉ's Morning Ireland, IMPACT spokesperson Bernard Harbor rejected claims that union members were to blame for the disruption and said the row could be resolved.

Aer Lingus has already hired in aircraft, but while that may not be sustainable in the long term, it suggests that the company is unlikely to relent on its refusal to resume negotiations soon.

Aer Lingus director of human resources Michael Grealy says the company is doing everything it can to minimise disruption for passengers.

The Aer Lingus executive denies that using Ryanair planes is selling out Aer Lingus employees who were against the attempted takeover, adding that using planes from other airlines when required is a normal part of business in the airline industry.

Mr Grealy said that some members of IMPACT are working the new rosters and the rosters are not facing rock solid opposition.

So far 136 crew members have been suspended and 170 are refusing to work the new rosters. 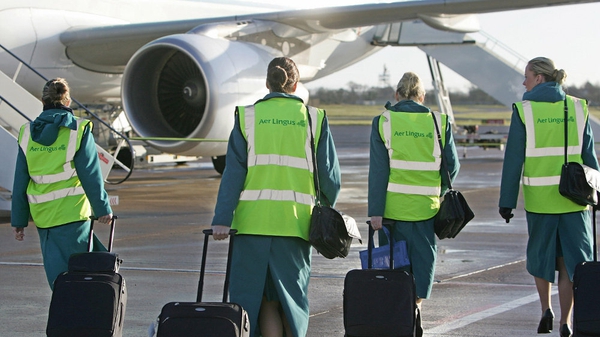