Taoiseach Brian Cowen says he has the support to lead his party 'into the next election and beyond'.

Speaking after the North South Ministerial meeting in Armagh, Mr Cowen said the events of yesterday were in the past and he would lead Fianna Fáil into the General Election as a united party.

Mr Cowen was responding to claims that he had lost credibility and authority as party leader following the controversy over the filling of six Cabinet vacancies.

Brian Cowen said misrepresentations and mythology had built-up in the past by the Opposition's constant negativity about the prospects of recovery.

But he said if the party faces this together, it could ensure the good name of the party would not be sullied.

However his former Foreign Minister Micheál Martin has called on the party's TDs to reflect again over the weekend on Mr Cowen's position as party leader, following what he described as the 'damaging' events of the past 24 hours.

Mr Martin said he had made his position clear at last Tuesday’s meeting of the parliamentary party, but he refused to say if he would be prepared to move again agaisnt Brian Cowen.

Cork-South Central TD Michael McGrath said he had no doubt there was a majority view within the party and among the public that a change of leadership was needed.

Deputy McGrath said another challenge to Mr Cowen's leadership was likely, but it was hoped he would do the right thing himself.

Longford/Westmeath TD Mary O'Rourke, however, said it would be futile to change the party leader now.

Former Minister for Defence Willie O'Dea earlier said party members who voted confidence in the Taoiseach on Tuesday should reconsider their decision.

Minister of State Conor Lenihan said the Fianna Fáil party had been rocked to the core and the Taoiseach had not a shred of credibility left.

On RTÉ Radio, Mr Lenihan said the attempt to reshuffle the Cabinet had effectively wrecked the party and Mr Cowen had to take responsibility.

Speaking on RTÉ Radio this morning, Mr Gormley said he only learned of Mary Harney's resignation as Minister for Health after it was reported on RTÉ's Nine News on Wednesday night.

Mr Gormley said he learned of the four other resignations after he got a text message at 6.30am the following morning.

The Green Party leader said the situation was 'bizarre' and took his party by surprise.

He said he was not aware that Cabinet ministers would resign and assumed there would be no reshuffle as of Wednesday evening.

Mr Gormley reiterated that Taoiseach Brian Cowen's judgement was 'misguided' and he said he was informed by Fianna Fáil party members that they were also unhappy about the move.

Government Chief Whip John Curran and Green Party TD Trevor Sargent clashed over what happened at a meeting between the Taoiseach and Mr Gormley on Wednesday.

Speaking on RTÉ's Morning Ireland, Mr Curran said the Green Party members who attended a meeting with Mr Cowen never indicated they would vote against his planned new ministerial appointments.

However, Mr Sargent disputed this and said his party had no indication from ministers on Wednesday that they would resign.

Labour Party leader Eamon Gilmore has said he intends to move the party's motion of no confidence in the Government next Tuesday.

A spokesman for the Green Party in Government said that an election is only weeks away, but that the party's TDs and Senators will consider the Labour motion when they meet on Tuesday.

A spokesperson for Fine Gael said that in the event that the Government tables a counter motion in response to the Labour Party motion they will vote against it. 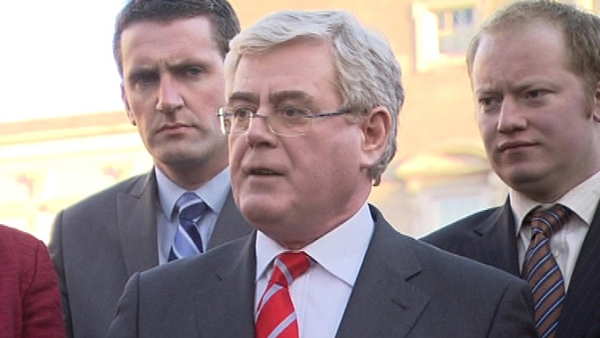 Labour to table motion of no confidence