Mr Gormley had an hour-long meeting with Mr Cowen at which they discussed the timing of the election and the legislative timetable.

He said he thought it would be possible to get the Finance Bill and other legislation in the government's programme through the Oireachtas, and still have the general election in March.

Later, speaking on RTÉ's Six-One News, Mr Gormley said he respected that it is the Taoiseach's prerogative to hold the election whenever he chooses.

But Mr Gormley said his party's clear view is that the election should take place as quickly as possible after the Finance Bill has passed.

He said the priority was the Finance Bill as it would give economic certainty after a week of infighting and bickering, which people are tired of.

Asked about speculation that the Taoiseach might conduct a major reshuffle of his cabinet, Mr Gormley said he had heard the speculation, but as of now the issue had not been discussed at Cabinet.

He said he would have to discuss the matter with his colleagues in greater detail before forming a position, adding that it would only be right and proper that the Green Party, as coalition partners, would be consulted.

Mr Gormley questioned whether it would be wise to carry out a widespread reshuffle in the run-up to the election, because it would be interpreted negatively.

But he said it may be necessary to carry one out to fill vacancies.

Meanwhile, speculation is mounting in political circles tonight that the Taoiseach may be considering a number of new appointments to Cabinet, in addition to filling the post left vacant by Mr Martin's resignation.

It is thought Ministers who are not contesting the general election could be asked to resign, in order to make room for a number of new appointments.

Three Ministers - Tony Killeen, Noel Dempsey and Dermot Ahern - have said they will not seek re-election, while Health Minister Mary Harney has not said whether or not she will run.

A spokesman for the Green Party added tonight that if any new appointments were to be made, they must not in any way delay the General Election.

Elsewhere, the Taoiseach ruled out allowing a Labour Party motion of no confidence in the Government, in Government time, saying that even Fine Gael thought it was 'stupid'.

Labour leader Eamon Gilmore said the people of the country wanted the Government out and branded it as dysfunctional.

Mr Gilmore said the Taoiseach was using every excuse under the sun to prolong his stay in office and said the country was stuck in the mire.

Speaking during Leaders' Questions in the Dáil, Mr Cowen said Mr Gilmore was the 'spokesman for negativity'.

Fine Gael leader Enda Kenny said he thought the no confidence motion was 'ill-timed' and 'ill-judged'.

The Taoiseach has confirmed he will be taking on the Foreign Affairs portfolio.

Fianna Fáil backbencher Mary O'Rourke has said the Taoiseach won last night's secret ballot by a margin of two to one.

She made the statement on the social networking site, Twitter.

There was also speculation that Mary Hanafin's job as Minister for Tourism, Culture and Sport might be in doubt.

However, the Minister has said after voting against a motion of confidence in Mr Cowen last night she met the Taoiseach, but did not offer her resignation.

Her resignation was not sought by Mr Cowen, she added.

Fine Gael TD Alan Shatter has said that Minister Hanafin could not remain in Cabinet with credibility, following her statement.

Ms Hanafin said she was happy to remain part of Government, and she said the Taoiseach was happy with that situation too.

The minister said she decided not to discuss her stance at last night's meeting because she did not want to influence other members of the party.

She said the Taoiseach knew how she would vote and how she felt about his position as Fianna Fáil leader.

The Minister said she now has confidence in Mr Cowen as Taoiseach and Fianna Fáil leader, and added that she would take credit, as well as blame, for the Government.

Ms Hanafin insisted her credibility remains intact. Asked if she retained leadership ambitions, the Dún Laoghaire-based TD said her big challenge at present - and only priority - is to get re-elected. 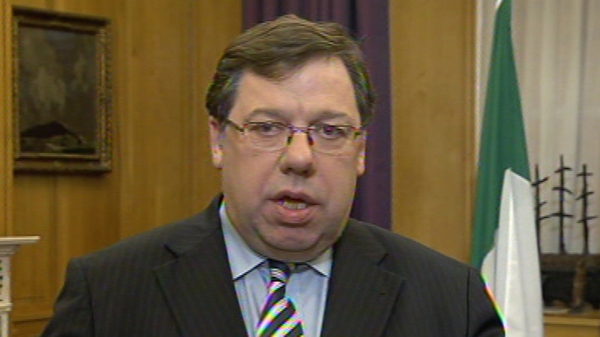 Brian Cowen tells FF he is not resigning