Minister for Foreign Affairs Micheál Martin has said Fianna Fáil should change its leader before the General Election.

Speaking to the media this evening, he said that throughout his time as a minister he has given his views in an honest and open way.

He said that he has reluctantly concluded that Fianna Fáil should change its leader before the General Election.

He welcomed the Taoiseach's announcement this evening to table a vote of confidence in his leadership.

However, he said he will be voting against the vote of confidence.

He said the continuing decline of the party was a reason for his offering his resignation. Latest opinion polls, resignations post Christmas and the absence of direction of late has led him to the move. He said 'survival of the party is at stake'.

He said low morale within the party and unhappiness among the public was also a reason.

Earlier this evening, Mr Cowen stated his intention to remain as Fianna Fáil leader, and said he is to a table a motion of confidence in his leadership at the parliamentary party meeting on Tuesday.

He made the announcement at a news conference at the Alexander Hotel in Dublin.

The vote will be carried out by secret ballot.

Mr Cowen said he made his decision having consulted with his party colleagues and having reflected on current and future challenges.

He said that he is not motivated by personal ambition, and that there is not 'an ounce of difficulty' between him and any of his colleagues.

The Taoiseach stated that by taking this initiative he believed he was acting in the best interests of the party and its membership and that he was confident of the outcome.

Asked about division within the party, the Taoiseach said there were 'varying views of varying degrees' across the party.

He said there was concern throughout the party about the present state of public opinion, but he said Fianna Fáil had an opportunity in an election campaign to put its case to the people.

The Taoiseach said the most important issue he had to consider was what was in the best interest of the country at this time.

As Taoiseach, he said his total focus must remain on discharging his duties to the people, to give legislative effect to the budget through the enactment of the Finance Bill and other related bills.

Asked about the time spent dealing with Fianna Fáil matters this week, the Taoiseach said there was no question of the party taking its eye off the economic ball.

On the revelations regarding his contacts with representatives of Anglo Irish Bank in 2008, Mr Cowen said all members of the parliamentary party acknowledged his good faith in relation to those issues.

He said his standing with the party in respect of that was not under question in any way.

A spokesperson for Finance Minister Brian Lenihan said that he welcomes the Taoiseach's decision to place a confidence motion before the parliamentary party on Tuesday.

The spokesperson said that Minister Lenihan had recommended such a motion to the Taoiseach.

The minister is pleased that the matter will be brought to a conclusion on Tuesday, the spokesperson said.

Fine Gael said if the Taoiseach was acting in the national interest as he claimed, he would have resigned a long time ago.

The party said it does not matter to the general public what the Fianna Fáil parliamentary party thinks of the Taoiseach as Mr Cowen has long since lost the confidence of the country.

Justice Spokesman Alan Shatter said that at a time of enormous economic difficulties we now have a Government in disarray, and a discredited Taoiseach in whom some of his own Fianna Fáil cabinet members have lost confidence.

He said it is in the interests of the country that this farce is brought to an end.

He said the public wants political stability and the time has come for a General Election.

He said it is also time for those Cabinet ministers who have lost confidence in Mr Cowen to resign and for the Green Party to pull the plug on the Government and for the Taoiseach to call an election.

The Labour Party has said Mr Cowen's decision meant the electorate was now faced with a situation where the traditionally two largest parties were divided over their leaders going into the General Election.

Education Spokesman Ruairí Quinn said he was not surprised at Mr Cowen's decision, adding that he is a tribal Fianna Fáil leader who has now put it up to Micheál Martin and others.

Mr Quinn predicted Mr Cowen will win the vote on Tuesday. He said the country needs a General Election as soon as possible.

He said Mr Cowen is giving backbenchers an opportunity to back or sack him, but he is not giving the people the same opportunity as they would sack him as they have no faith in the Government at this stage.

He said what is more disgraceful is that those who challenged Mr Cowen do not have the backbone to go to the people either, because if they withdrew support it would force an election. 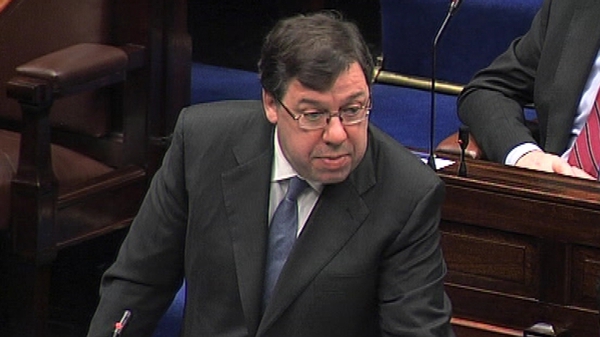