Minister for Defence Tony Killeen and former minister and Government Chief Whip Michael Woods will not be contesting the upcoming General Election.

Mr Woods made the announcement at a meeting of Fianna Fáil members in Kilbarrack, Co Dublin.

Mr Woods served under five Taoisigh, five times as Minister for Social Welfare, three times in Health, twice in Marine & Natural Resources, once in Agriculture and Food and once in Education and Science. He was elected to Dáil Éireann in 1977.

Paying tribute to Michael Woods, Taoiseach Brian Cowen said 'in a long career, as a TD and a Minister Michael Woods has served our country with great intelligence, insight and true dedication.

He continued, Michael Woods was already a senior figure in the Fianna Fáil Parliamentary Party when I was first elected to the Dáil in 1984. He was a colleague I found to be extremely generous with his time and advice to me as a young man starting off in politics.

Mr Killeen said his decision follows medical appraisal and advice in recent weeks. He was diagnosed with bowel cancer in 2008.

Speaking on RTÉ's Morning Ireland, Mr Killeen said he had intended to stand for re-election, but his health problems forced him to reconsider.

Mr Killeen is the third serving Fianna Fáil senior minister - the others being Noel Dempsey and Dermot Ahern - to announce their decision not to contest the upcoming election.

A statement by the 58-year-old Clare TD said: 'I have informed the Taoiseach of my decision and I am deeply grateful to him for his backing particularly during my illness and cancer treatment.

'I sincerely thank the people of County Clare for their support during my 26 years as their public representative.'

A former national school teacher, Mr Killeen was a member of Clare County Council from 1985 to 1997 before being first elected to Dáil Éireann in 1992.

Mr Killeen was appointed as Minister of Defence last March following the resignation of Willie O’Dea.

Prior to that, Mr Killeen held portfolios at the Agriculture, Communications, Environment and Enterprise departments.

Taoiseach Brian Cowen has described Mr Killeen as a 'hard-working, dedicated and articulate TD' who had contributed enormously to the work of the Cabinet.

In a statement, Mr Cowen said: ‘I fully understand Tony's decision not to seek re-election. He has shown true grit and strength of character in battling a serious illness in recent times.

‘I want to thank Tony for his friendship and effort over the years. I wish him and his family all the very best on his retirement.'

Later, in a statement Mr Cowen thanked Mr Woods for his service and said he had 'served our country with great intelligence, insight, and true dedication.' 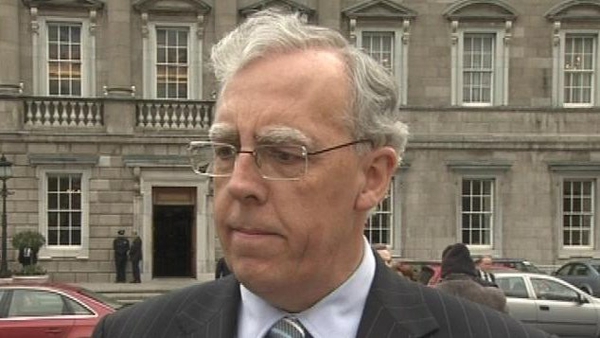