Former Taoiseach Bertie Ahern has criticised his successor Brian Cowen's failure to communicate regularly with the public during the economic crisis.

In an interview with the Irish News of the World, for which Mr Ahern writes a column, the Dublin Central TD said that when he was Taoiseach he had decided it was best to talk to the media regularly.

But Mr Ahern said that when he left office, his successor Mr Cowen had adopted a different approach by not doing daily doorstep interviews with the media.

‘If you ask me, my view is you're better doing it my way, but he opted not to do that,’ Mr Ahern told the paper.

Mr Ahern added that he thinks the Taoiseach should be communicating the information he has as communication is more important now.

A spokesman for Mr Cowen said he had no comment to make.

On Thursday night, 59-year-old Mr Ahern announced that he would not be seeking re-election to the Dáil at the next election.

Asked about whether he plans to seek a nomination to run for President, Mr Ahern said he would like to run if the circumstances were right, but added that he has to be realistic.

‘I think at present it would be very difficult for a Fianna Fáil member to be elected President, no matter who it was,’ he said, adding that ‘at the moment though, with the party political rankings, it's not too realistic.’

Mr Ahern was also critical of the Government's handling of the EU-IMF bailout, saying he had wondered when he saw the Greek bailout taking place what contingency plans were being drawn up by the Department of Finance and the Central Bank to stave off the possibility of Ireland going the same route.

Mr Ahern added that he did not know whether the Government had examined all the options early-on, to see if there was a solution available.

Mr Ahern said he also thinks that if action had been taken earlier in the year to signal a correction to the public finances, the bailout might have been avoided. 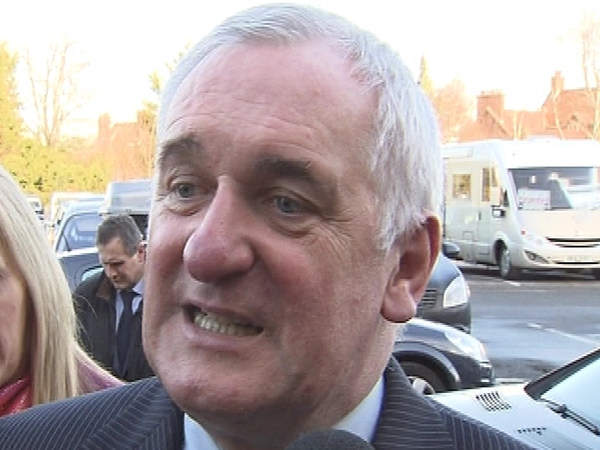