Motorists are once again being advised to take extreme care while driving this evening as road conditions remain extremely icy around the country, especially on secondary routes.

Another night of sub-zero temperatures is expected, with lows of -12C in some areas.

Met Éireann has warned of potential flooding as snow and ice melts over the coming days.

Renewed warnings have been issued by the gardaí and the Road Safety Authority, despite the expected onset of a thaw over the weekend.

Roads are particularly icy in Leinster, Connacht and Munster, with black ice in some places.

The worst affected routes include the M50, the M1 between Lissenhall and Balbriggan in Dublin, the N11 in counties Dublin and Wicklow, the M8 at Urlingford in Kilkenny, the M2 and N2 in counties Meath and Louth, the M7 around Nenagh, Co Tipperary, and the N4 through Carrick-on-Shannon in Co Leitrim.

Dublin Bus has said that it will operate a normal Sunday service tomorrow - St Stephen's Day - with additional early morning services on some routes.

Meanwhile, Bus Éireann is to operate a limited service including inter-city services to main destinations and some commuter services in the Greater Dublin Area, Cork and Limerick.

There will be no rail services tomorrow, but the Luas in Dublin will operate.

Further information can be found on the companies' websites.

Thousands of people throughout Europe are spending Christmas Day away from their families and friends having had their flights delayed on cancelled because of snow and ice.

The disruption to schedules at Dublin Airport over the past week has resulted in many passengers being stranded.

Dublin Airport closed for Christmas Day, as is traditional, and flights will not resume until tomorrow morning.

The DAA said it had done its best to provide accommodation for passengers who remained stranded at Dublin Airport yesterday evening.

More than 200 stranded air passengers are spending Christmas Day at the Carlton Hotel near Dublin Airport.

The Defence Forces say their severe weather assistance will continue throughout the Christmas period.

The Army is transporting healthcare professionals to medical facilities in Dublin, Cork, the Midlands and the West of the country.

Patients are also being transported to Dublin from Cork and the Midlands for ongoing treatment, and a meals on wheels service is being provided to the elderly and housebound in a number of locations around the country.

A rescue operation is under way in Co Wicklow to reach two people who are stranded in the Sally Gap area.

Mountain rescue teams say they are trying to locate a couple who were travelling to Dublin but apparently got into difficulty when their satellite navigation system guided them in the wrong direction.

Motorists are being urged to stay away from the more difficult routes, such as the Sally Gap, until conditions improve.

The extremely cold temperatures in the Dublin area overnight caused water valves in Fairview to freeze.

These valves distribute water supply in the northeast of Dublin city.

Disruptions include reductions in pressure and in some cases a loss of supply. Affected areas include Clontarf, Killester and Raheny. 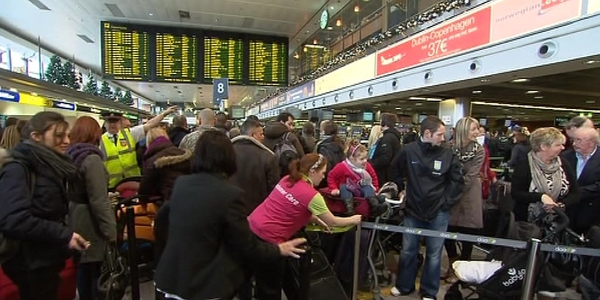 Flights suspended at Dublin Airport until 5am