Fine Gael and Labour have published their own Budget proposals just days before the Government presents the Budget.

Next week's Budget is widely expected to be one of the most austere in the State's history as the Government seeks to correct the public finances.

Fine Gael says it will limit income tax increases to half the levels proposed by the Government over the next four years.

The party says it will stick to the target of bringing the budget deficit into line with EU targets and making €15bn worth of tax and spending measures over four years.

Fine Gael leader Enda Kenny said his party's plan would create 100,000 new jobs and described it as 'a better, fairer way' than the Government's proposals.

He also said the party would cut the number of national politicians by 35% and close FÁS and the HSE.

The party's plan includes what it calls 'radical public sector reform', including 18,000 more voluntary redundancies than the Government is proposing.

Mr Kenny said: 'Fine Gael will make jobs and economic growth a precondition, not an aspiration.

'Confronting waste, inefficiency, duplication and redundancy in public spending should be the focus of Ireland's budgetary adjustment.'

Instead of an annual recurring tax on property, the party wants to increase the second home tax and bring in a 'low' capital gains tax on the site values of primary homes.

Fine Gael Finance Spokesman Michael Noonan said the party's plan for jobs would include a one-off €10m marketing budget for State agencies, which is aimed at restoring Ireland's reputation worldwide.

Mr Noonan said Fine Gael would scrap the €10 travel tax, abolish the lower 8.5% rate of employers' PRSI of workers earning below €356 a week and increase DIRT to 30% to encourage more household spending.

He added: 'Fine Gael's job stimulus plan will use streamlined and restructured semi-State companies to invest an additional €6-7bn, over and above current plans, in investments in 'next generation' energy, broadband, forestry and water infrastructure.'

The Labour Party said that its Budget proposals will reduce the country's deficit and provide for jobs and growth.

Labour Finance Spokesperson Joan Burton said that the Government's planned €6bn adjustment in next week's Budget is 'dangerous for Ireland' and poses an 'unacceptable risk to jobs and growth'.

Ms Burton said: 'Our proposal for a fiscal effort of €4.5bn in 2011 strikes a balance between the need to put our public finances on the right track and leaving room for growth.'

The party plans to set up a jobs fund of €500m and promote what it sees as 'tax justice'.

It wants to introduce a third rate of tax of 48% for the highest earners.

Ms Burton said: 'The core of the Labour Party's budget proposals is made up of measures that will ensure that very high income earners make a fair contribution by limiting their ability to shelter their incomes from tax.'

It has also promised to reform public spending and 'develop a knowledge-based smart public service'.

Ms Burton said: 'The focus of public spending in this country must be on the delivery of quality frontline services to the citizens and taxpayers footing the bill.'

Other parts of the plan include a promise to maintain investment in education and reduce the cost base in the health service, while maintaining front-line services.

Labour has set out 'specific measures' for next year, which include cutting the public sector pay bill by €400m and capping all public sector and political salaries at €190,000.

A well as the cuts to politicians' salaries, Labour says it will introduce a car-pooling arrangement for Ministers.

It says that garda drivers will be replaced by civilians, other than where 'the Garda Commissioner advises that security considerations apply'. 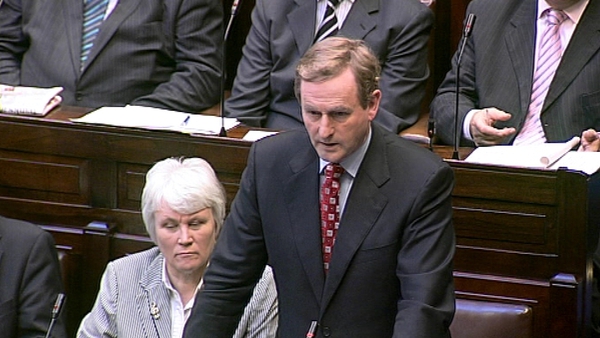