Main Points:
* Pearse Doherty was elected after the fourth count without reaching the quota - with a total number of 13,719 first-preference votes
* Quota of 17,213 was not exceeded
* Labour Party vote lower than expected

19.51 Fine Gael's Barry O'Neill said the people of Donegal South West had sent a strong message to the Government.

19.21 Pearse Doherty has said 'Today's result is a vote for change. It is an endorsement of Sinn Féin's argument that there is a better way.'

18.40 Sinn Féin’s Pearse Doherty has been elected as TD in the South West Donegal by election

18.22 It is being reported the results of the fourth count in the Donegal by-election are due within the next few minutes and that Pearse Doherty is likely to be elected without reaching the quota

18.10 Pearse Doherty has said the success of his campaign is based on people’s support for Sinn Féin’s policies and their opposition to the Government's four-year plan

17.15 Pearse Doherty's vote is now 15,188, after the results of the third count. Thomas Pringle’s vote is now being redistributed

15.55 After the second count no candidate has exceeded the quota and next lowest candidate Frank McBrearty’s vote is now being redistributed

14.49 Labour’s Frank McBrearty has said he will stand in the next General Election and that the party can elect a TD for the constituency. He said he is disappointed but was happy the party had trebled its vote.

No one has reached the quota and Ann Sweeney has been excluded. Her votes are being re-distributed

15.03 Pat ‘The Cope’ Gallagher has admitted that on the basis of the figures today, one Fianna Fáil seat was the most likely prospect in Donegal in next year's General Election

14.44 Tánaiste Mary Coughlan has said Fianna Fáil had put in a good fight and would now begin to get ready for a general election. She said the dynamics of a by-election were different and Sinn Féin had the momentum of the High Court challenge behind it.

13.29 Fine Gael's Barry O'Neill said he was not disappointed with his showing but was proud he stood and proud of his performance. He also said he would put himself forward as a candidate in next year’s General Election

13.26 Sinn Féin's Pearse Doherty has said he would wait for the official declaration before assuming that he elected as TD for Donegal South West, but it was clear already that the platform and policies put forward by Fianna Fáil have now been rejected

13.23 Tánaiste Mary Coughlan has conceded defeat but said it is still possible for Fianna Fáil to win two seats in the constituency in the General Election next year

13.19 Labour's Joe Costello has denied that the failure of Frank McBrearty to make a serious challenge in Donegal represents the failure of a Labour 'big name' candidate policy

12.33 Should Pearse Doherty win this by-election, the Government's already slim Dáil majority will be reduced to just two.

And that majority is dependent on Independents Jackie Healy-Rae and Michael Lowry continuing their support for the coalition.

12.26 Labour leader Eamon Gilmore has said he is very satisfied with the performance of his candidate in Donegal South West.

Mr Gilmore said Frank McBrearty had trebled the Labour vote, and the party would now build on this and hope to win a seat in the General Election.

12.05 Sinn Féin leader Gerry Adams has said candidate Pearse Doherty performed so well in the Donegal South West by-election because he was ‘head and shoulders’ above other candidates.

He said the party would not presume the outcome of the ballot until it is officially declared.

Mr Adams said the message appears to be that the Government has to go.

Commenting on the vote Fianna Fáil received, he said regardless of how people voted in Donegal South West the current Government is not capable of leading Ireland out of its current problems.

Mr Adams said the people who voted have taken a stand with Pearse Doherty against the Government.

The Labour Party says it is happy with the result but there is disappointment within the party that Frank McBrearty did not perform better.

Independent Thomas Pringle is expected to be eliminated after the first count.

Fine Gael's Barry O'Neill is likely to take second place in the poll with the help of transfers.

11.00 All the boxes have now been opened and the count staffs are continuing their work. A first count result is not expected until after lunchtime today.

The Labour Party vote is much lower than expected with Fianna Fáil and Fine Gael, so far according to tallies, neck and neck.

10.46 Note: Information on the count so far is from tallies, which are indicative and not definitive. 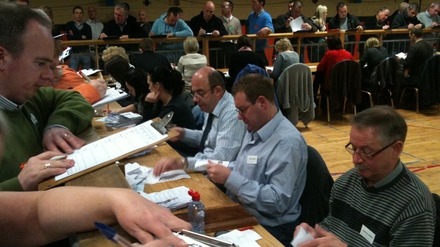 A joint tally between parties is being conducted, by lunchtime it will paint a clear picture of how this election is likely to go.

09.00 68 counters have begun opening ballot boxes at the Finn Valley Centre in Stranolar.