Taoiseach Brian Cowen has said that the four-year economic plan announced yesterday would allow people the opportunity to see the level of adjustment that was needed in their lives and to plan ahead for the future.

In a statement to the Dáil, Mr Cowen said the plan would provide a signpost and a pathway to recovery.

Mr Cowen said the progress of the past 15 years could be maintained and not all gains would seep away.

Mr Cowen said that any attempt to change or renegotiate the plan would have to have the approval of the people.

On widening the tax base, he said we could not continue with a situation where 40% of the workforce made no contribution, but he said the extra taxation was proportional and those who earn most would pay most.

The Taoiseach said the overall objective of the plan was to see Ireland return to a country with less than 10% unemployment, with public finances back in order.

Mr Cowen said he envisaged a reformed public service underpinned by efficiency and effectiveness in the delivery of services for those who need them.

He said the growth strategy was fundamental and he said we could not have a functioning economy without a repaired banking system.

Fine Gael leader Enda Kenny told the Taoiseach that he had the responsibility to change the nation for the better but he had failed.

He launched a scathing attack on Finance Minister Brian Lenihan who he accused of 'supreme arrogance' in his comment yesterday that any other plan would be nonsense.

Mr Kenny said he would not take lectures from a Government, which had been less than compliant with the truth.

He said the Government had taken the people to the edge of an economic abyss.

Mr Kenny said the next government would not be constrained by the four-year plan produced yesterday.

He said it pretended to deal with the real crisis whereas there was no evidence of real and radical political reform.

He criticised the blank cheque policy of dealing with the banks as a result of what he called the 'catastrophic misjudgement' of the Minister for Finance.

Labour leader Eamon Gilmore has told the House that the plan was the result of the folly of the government.

Eamon Gilmore said the crisis was the work of Mr Lenihan and Mr Cowen, but also of people like Charlie McCreevy.

He said the plan was a recipe for hardship and stagnation, but accepted that a programme of adjustment was unavoidable.

Mr Gilmore said the plan can be changed in negotiations, according to a Department of Finance spokesperson.

He said the Irish people do not even know who is negotiating on their behalf and for what.

The Labour leader said we do not know the size of the loan and how much is for the banks.

Mr Lenihan reiterated that the rate of corporation tax will remain unchanged, adding that the mooted VAT increases had been left to be implemented later in the plan.

He insisted that the four-year plan was not just about cutting expenditure, but was also about growth.

Green Party Minister Eamon Ryan said the Department of Finance is the lead negotiator on behalf of the Government, saying that all the people involved were very capable.

He said he understood the rage of the public, but he said the private sector and bondholders had also taken hits.

Mr Ryan also said there was a need for consensus among the parties.

He said he wanted to get the key tasks done and then face the people.

Sinn Féin's Caoimhghín Ó Caoláin said he believed there was a better way forward and that his party opposed the plan.

He said it was a plan for national impoverishment.

He referred to the economic treason of the Fianna Fáil /Green Government and he said it was unacceptable that such a plan be put forward by the most reviled party in the history of the State.

He said the plan was an attack on sovereignty and democracy and called it a doomed strategy.

Mr Ó Caoláin said there is an alternative to the scale of the cuts.

Earlier, Fine Gael’s Spokesperson on Enterprise, Jobs & Economic Planning, Richard Bruton said the €1 cut in the minimum wage would be among several aspects of the four-year economic plan that the party would seek to renegotiate with the European Union, if it is in government after the General Election.

However, Minister for Foreign Affairs Micheál Martin said there were good reasons for proposing to cut the minimum wage, because it was a competitiveness issue.

There will be no Dáil vote on the document, which outlined spending cuts and tax increases which are designed to achieve a deficit of below 3% of GDP by 2014.

Meanwhile, a spokesman for the EU Economics and Monetary Affairs Commissioner, Olli Rehn, has indicated that senior bond holders may have to share the burden of the Irish bank bailout.

Amadeu Altfaj said the European Commission wanted a banking and financial sector that paid for its own mistakes and risk-taking.

Mr Kenny has said it would be crazy for the Dáil to go ahead with the planned 33-day holiday over the Christmas period in the exceptional circumstances that prevail.

His colleague Alan Shatter said that at the latest, the Dáil should return on 10 January to deal with the Finance Bill.

The Taoiseach did not reply. 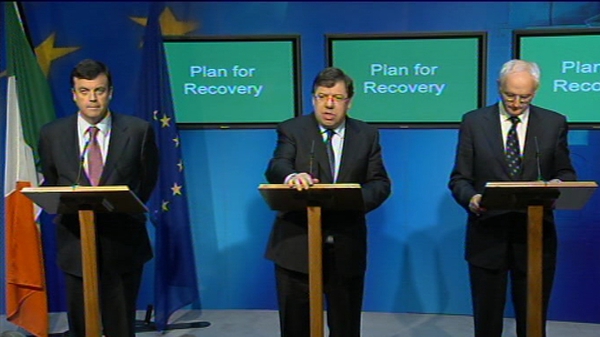