The European Union and the International Monetary Fund will offer the Government an €85bn facility, which can be used to recapitalise the banks and fund the public finances.

The package would see the level of capital in the Irish banks being increased from eight to 12% in a move to bolster confidence of depositors in the financial system.

Last week the IMF and EU team began intensive meetings with the Central Bank to reshape the financial system for the future.

Their plan would boost levels of capital in banks, to cushion against future loan losses. It is a significant figure by international standards.

It is aimed at boosting confidence - particularly for depositors who are also covered by the EU back guarantee.

The money will come from an €85bn facility provided by the EU and IMF and the remainder will be used to run the country on a day-to-day basis perhaps over a two to three year period.

While the authorities are reluctant to fully nationalise AIB it will need significant new funds. One option is that the State will be left with an 99.9% stake the bank in return for the new capital.

It is also going to take some bad loans out of its AIB's UK subsidiary and try to sell the division again. Bank of Ireland, currently 36% State owned, would become majority Government controlled, and authorities are hopeful of selling off EBS quickly.

The size Irish banks will be significantly reduced as blocks of loans would be sold off.

Investors would be offered loss-sharing arrangement with the State.

It is likely a formal letter of intent will be issued by the IMF to the Government early next week containing final details.

The International Monetary Fund earlier said talks between it and Ireland were moving forward quickly, but it was up to the Irish Government to make the necessary political decisions.

The IMF's First Deputy Managing Director, John Lipsky, made the comment in New York in response to questions by reporters about the impact on the negotiations of growing political instability in Ireland.

Mr Lipsky said the IMF's work in Ireland was technical, not political.

EU Economic and Monetary Affairs Commissioner Olli Rehn said it is essential that Ireland passes the Budget in the timeline foreseen, adding this would be best done sooner than later.

The Commissioner was speaking following a confidential briefing with Irish MEPs at the European Parliament in Strasbourg, which lasted for just over an hour.

Mr Rehn said every day that is lost increases uncertainty and increases the economic and social cost.

He added that Ireland needs to adopt the Budget, get it out of the way and move on.

Mr Rehn also said that while he did not have a position on domestic politics, political stability is important.

However Socialist Party MEP Joe Higgins walked out of the meeting after just two minutes.

For many of the MEPs at the meeting the key issue was keeping Ireland's 12.5% corporate tax rate off the table.

Minister for Minister for Enterprise, Trade and Innovation Batt O'Keeffe told the Dáil that Ireland's corporation tax of 12.5% is critical, and is but one of a number of factors that makes Ireland attractive to multinational companies.

He was speaking this evening on a Fine Gael Private Members' Motion on the need to defend Ireland's corporation tax rate.

Mr O'Keeffe also said a move away from the existing corporation tax rate would have a significant negative effect on existing and potential investments.

Meanwhile, Managing Director of the International Monetary Fund Dominique Strauss-Kahn was commenting on Ireland and Greece.

Speaking during a Swiss Television interview Mr Strauss-Kahn's message was: 'We must tighten our belts.'

Referring to the crisis in Ireland and Greece he said: 'The idea that you may live long beyond his means is a crazy idea, even if the causes are different in these two countries.'

The director of the IMF estimates that these countries 'in one way or another we have to tighten their belts to get back to something that is bearable ... Those who are in a weak position are those who get in trouble first.

'That is why we need to preserve as much as possible social spending. We cannot continue like this.

'The solidarity of European countries should avoid the collapse of some states, but it requires rather drastic economic measures, and once again it will be the weakest countries that will suffer most', he said.

Earlier, it emerged that Taoiseach Brian Cowen telephoned the leaders of Fine Gael and Labour last night to stress the importance of the Budget being passed on 7 December.

It is understood that Mr Cowen did not directly ask for support for the Budget, but did offer access to officials in the Department of Finance and other Government departments to underline the necessity of passing it.

The Government's view is that support from the IMF and the European Union depends on the measures included in the Budget being passed.

Minister for Transport Noel Dempsey said this morning it was imperative that the Budget is passed and that the Opposition gives as much support as possible.

The Cabinet met this morning to sign off on its four-year economic plan, which is due to be published tomorrow.

Last night, Mr Cowen said he would seek dissolution of the Dáil after the current budgetary process is complete in the New Year.

He made the announcement after the Green Party called for a General Election to be held in January.

Euro 'at stake' in bailout

Elsewhere, Germany's finance minister has said the fate of the shared European currency was at stake in the proposed bailout of Ireland.

Speaking in the German parliament, Wolfgang Schaeuble said: 'It's our common currency that's at stake.'

Mr Schaeuble said Germany must take responsibility 'otherwise there will be untold economic and social consequences for our country'.

Luxembourg's foreign minister has said Ireland should not have to raise its corporate tax as a condition for receiving the bailout.

Jean Asselborn said: 'The situation that Ireland finds itself in is already difficult enough. We should be careful not to strangle Ireland. Ireland has already lost so much economically.

'And if we take away every attraction Ireland has for inward investment then things will only get worse. And the worse it gets, the more expensive will it get for Europe in the end.'

Elsewhere, Greece has won approval for a new tranche of rescue funding but the IMF and EU prescribed even tougher action on tax evasion, and waste in health care and state companies to earn another payout.

They also warned that Greek wages were too high and said the country, saved from imminent insolvency in May, faced potential problems in repaying on time although solutions were available in that case.

The expert auditor from the IMF Poul Thomsen said: 'The programme is at a crossroad.' 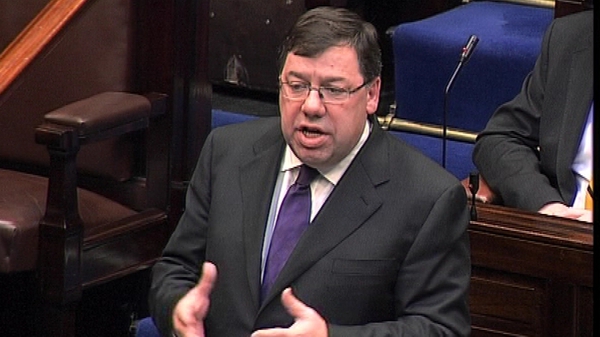 Brian Cowen to continue as Taoiseach