The main Opposition leaders have called for a General Election as soon as possible after Green Party leader John Gormley said the country must go to the polls in the second half of January 2011.

Fine Gael leader Enda Kenny called for an 'immediate' General Election after Green Party leader John Gormley said an election must take place in the second half of January 2011.

Meanwhile, Labour leader Eamon Gilmore has also added his voice to the calls for an election saying that 'it is essential that we have a new government elected as soon as possible.'

In a statement on his website, Mr Gilmore said his preference would be for a dissolution of the Dáil today and the holding of a General Election 'at the earliest possible date provided for under law.'

This, he said, would allow the election of a new Government 'by the middle of December.'

Mr Kenny issued a statement this afternoon saying the Green Party's call for the country to go to the polls in the New Year has caused further political uncertainty.

He said: ‘What is needed now is an immediate General Election so that a new Government, with a clear parliamentary majority, can prepare the four year economic plan, complete negotiations with the EU and IMF and frame a budget for 2011.’

The Green Party leader made his announcement at a specially convened news conference this morning.

The leader of the Government's junior coalition partner said that three things needed to be done: produce a credible four-year plan, deliver a Budget for 2011, and secure funding support from the European Union and International Monetary Fund.

Mr Gormley said the party had always said it would only continue in Government as long as it would benefit the people, but leaving the country without a Government would be damaging and breach duty of care.

The party had now reached a point where the Irish people need political certainty to take them beyond the coming two months, he said.

The decision was made last Saturday after a long series of meetings, he said.

The last three weeks had been traumatic for Irish people, he added.

'Since entering Government in June 2007, we in the Green Party have worked to fix and reform the economy. It has been difficult. We have taken tough decisions and put the national interest first,' he said.

Mr Gormley said in recent days there was a real problem in terms of communications and the answers the Greens got were not clear enough.

He said the party felt they needed clarity around the issues.

Speaking on RTÉ's News at One, Green Party Minister Eamon Ryan said the first priority for the Coalition Government was to pass the Budget and publish its four-year plan in the national interest.

He said after that there should be a General Election.

Green Party Chairman Dan Boyle has said the party made its decision because of the need for economic and political certainty.

He said they had decided not to pull out of Government now because it could compromise key elements of the negotiations between the Government and the EU and IMF.

Mr Gogarty said he did not think Fianna Fáil liked the party’s decision but he said the writing was on the wall.

A spokesman for the Taoiseach said the Government's focus remains firmly on the Budget and the four-year plan.

Mr Gormley only made the Taoiseach aware of his party's decision minutes before his announcement, it has emerged.

The development appears to have taken Brian Cowen by surprise, who was giving an interview on local radio while Mr Gormley was trying to contact him.

The Taoiseach received the news at 11.30am, just minutes before the Green Party press conference.

Effectively it means the election campaign has begun, putting the Government in an extremely difficult position.

Earlier, Mary O'Rourke TD said that the Fianna Fáil parliamentary party should meet early in the New Year to discuss its leadership and future direction.

Speaking in Athlone, Ms O'Rourke said that while she believed the Taoiseach had credibility after receiving the support of his colleagues at European level, the appropriate time to discuss his leadership would not be until the Budget had been passed.

Her comments follow renewed calls by backbenchers Noel O'Flynn and Mattie McGrath for Brian Cowen to resign after the Budget.

Fianna Fáil Junior Minister Sean Connick has said the issue of leadership will have to come up when an election is called.

He added that he would not be in support of removing the Taoiseach at this point in time.

Fine Gael's Deputy Leader James Reilly has urged the Taoiseach to go to the Áras with his seal of office and seek the dissolution of the current Dail.

Mr Reilly said the people need to be able to make a decision on who governs them.

He said Fine Gael would not give a blank cheque to Government with regard to supporting the Budget on 7 December.

Mr Reilly said he did not know if there was any point in tabling a no confidence motion in the Taoiseach, as the stance of independents and other parties in the Dail would need to known in advance of any such move.

He said that Fine Gael has policies in place to reform politics, the health service, public service and many other aspects of Irish life.

Asked if the party intended to publish its budget, he said that would happen in time.

Independent TD Michael Lowry said it was now highly unlikely that he would support the Budget, unless Labour and Fine Gael consult with the Minister for Finance to reach agreement with the Government on budget measures.

Independent TD Jackie Healy-Rea said it was very unlikely he would support the Budget, but he would have to see what was in it before making a final decision. He said he would not support cuts to the old age pension.

Fine Gael's Richard Bruton said the Government seemed to be falling apart and there should be a General Election.

'The Green Party has at last recognised what the country has realised for many months, that this government is long passed its sell-by date and that it is incapable of leading the country to economic recovery.'

Later, Mr Gilmore said the announcement by the Green Party that they intend to withdraw from Government in January puts a final date on the life of the current Government.

He said the Green Party decision was welcome although belated.

Mr Gilmore said the sooner a General Election is held the better.

He said the Labour Party is now accelerating its election plan and would stand before the people as an alternative Government intent on growing the Irish economy, getting people back to work and in reforming the public service and politics.

His party colleague Pat Rabbitte said the Green Party is jumping from a sinking ship.

Mr Rabbitte said that the party has been a 'pathetic and weak influence in Government' and has no future politically.

He said the Greens will now claim it was them who brought on the election and he said the move was ' one-upmanship' of the highest order.

Sinn Féin has said the Government should hold a General Election before Christmas, saying it would help stabilise the country and send a positive message to the markets.

TD Aengus Ó Snodaigh said the Green Party had a cheek to say they are calling for an election at the same time as supporting a Budget that would hurt a lot of people.

Elsewhere, gardaí have ejected a number of people from Government Buildings.

The group, made up mainly of Sinn Féin supporters, had pushed their way through the gates during a protest against the Government at lunchtime.

The protest is continuing outside the gates. Mr Ó Snodaigh accused gardaí of being heavy-handed during the protest.

Independent Deputy Michael Lowry has called on the Taoiseach to disband the Dáil and have an immediate General Election.

Mr Lowry said what is necessary now is for the Taoiseach to go to the President, call a General Election, and clear up the uncertainty.

He said if that is not to happen he is calling on Fine Gael and Labour to support the Government in bringing forward an acceptable Budget, acceptable to the IMF and the ECB.

He reiterated that he is unlikely to support the current Government in the forthcoming Budget. 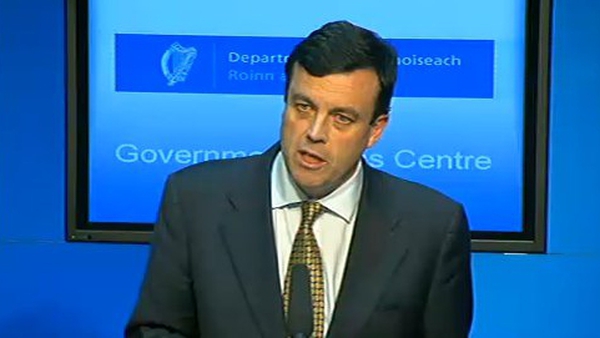 <p>Deal will have conditions, says Rehn</p>