Mining experts have said 29 workers could have survived a coal-mine disaster in New Zealand by sealing themselves off from toxic gases, but warned rescuers must hurry to get them out.

Prime Minister John Key said there was 'every chance' the men could be alive, having been trapped in the Pike River coal mine since Friday, but as families wait the mood at the site is grim.

Queensland University's David Cliff, who has worked in mine safety for almost 20 years, said the men could be sitting in an air pocket but it would be a 'race against time' to save them.

'The general rule with a coal mine is the faster the better,' he said, warning about the build-up of poisonous gases. 'You have got to get out of there in a hurry.'

Efforts to reach the miners have been hampered by high levels of methane and carbon monoxide, and fears of a second blast, preventing frustrated rescuers from entering the shaft.

Mr Cliff said: 'If they were in a refuge of some sort, if they have a supply of air, they might last a long time - we should not give up on that sort of hope.

'If they have been lucky and they are in the area of the mine which is relatively unaffected by the explosion, then they could have barricaded themselves in.'

This would involve putting a cloth or other material up to isolate the area from the harmful gases. Another possibility was that the men had grouped at an outlet for the compressed air pipes that run through the mine.

But Mr Cliff said in stark contrast to the miraculous recovery of 33 miners trapped for almost ten weeks in a mine in Chile, there is no guarantee than those at Pike River have access to breathable air.

He said the mine's ventilation system had stopped and methane was seeping out of the coal.

The mine, dug into a hillside, is accessed by a horizontal, 2.5-kilometre tunnel, while a large ventilation shaft brings fresh air from the surface about 150 metres above.

Pike River boss Peter Whittall would not speculate on what conditions the men could be surviving in, but said air would be the priority.

'It would certainly be quite hot and stuffy because there's not a lot of ventilation down there,' he told reporters.

Each man would have been carrying a breathing device that could generate oxygen for 20 to 60 minutes, and there were some of these stored underground.

'The length of time now, it's 72 hours since the incident, you are always hopeful but with the passing of each hour the chances of survivors is lessening,' he said.

But Professor Bruce Hebblewhite, head of engineering at the University of New South Wales in Sydney said there were too many unknowns to dismiss their survival chances.

He said a major concern was whether a coal fire was still burning underground, creating poisonous fumes and risking setting off another blast. 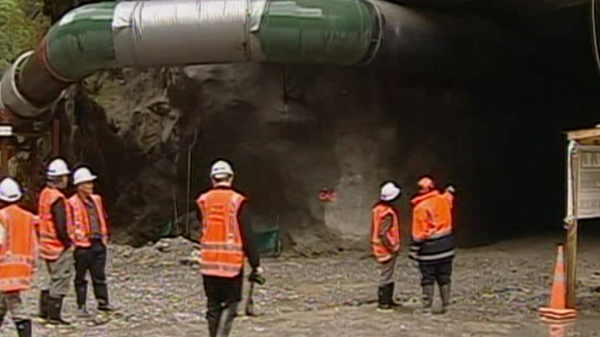