A Co Louth businessman who took a libel action against his former employers after an incident in which he sleep walked naked has been awarded €10m in damages.

The jury agreed that a press release sent out by mining company Kenmare Resources in July 2007 insinuated that Donal Kinsella had made inappropriate sexual advances to company secretary Deirdre Corcoran on a business trip in Mozambique in May that year.

The award is the highest award of damages for defamation in the history of the State.

It is more than five times the €1.87m awarded to communications consultant Monica Leech in June 2009.

Lawyers for Kenmare Resources were granted a stay on the award pending an appeal to the Supreme Court.

Mr Justice Eamon De Valera put a stay on the award with the exception of €500,000.

Senior Counsel Bill Shipsey said the award was 'off the Richter scale' and it was inconceivable that it would not be set aside by the Supreme Court.

Kenmare Resources issued a statement saying it was 'shocked' at the verdict and it will 'immediately and vigorously appeal the decision'.

Lawyers for Mr Kinsella earlier told the jury today that the press release would mean to an ordinary person that 'something juicy' was going on in the jungle and that Mr Kinsella had tried to 'jump the company secretary'.

In May 2007, the 67-year-old from Dunleer was on a business trip in Mozambique.

He appeared naked three times at the bedroom door of Ms Corcoran during the night.

The court heard that he had been drinking and taking painkillers and had a habit of sleep walking and not wearing pyjamas.

Ms Corcoran later complained and an investigation was carried out by a solicitor who found that Mr Kinsella was simply sleep walking.

After an inquiry from the editor of the Irish Daily Mirror, John Kierans, the company issued a press release in July 2007. Mr Kinsella said the press release defamed him.

Lawyers for the company told the jury today that it had tried to sort out the problem amicably.

Mr Kinsella had been asked to step aside as the chairman of the company's audit committee so that Ms Corcoran would not have to have one-to-one contact with him.

But Senior Counsel Oisín Quinn said Mr Kinsella could not understand another person's point of view.

Mr Quinn said there was no malice in the press release that had been issued.

He said the company behaved properly in difficult circumstances that were not of its own making.

Lawyers for Mr Kinsella urged the jury to award his client big damages and said the company had aggravated matters by accusing Mr Kinsella of being a liar and a perjurer.

The 2009 Defamation Act allows the Supreme Court on the hearing of an appeal from a decision of the High Court to substitute an amount of damages it considers appropriate.

However, this case was taken before the new act came into force. 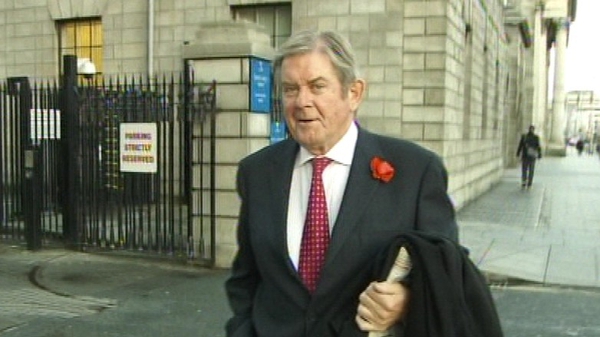