Student leaders have condemned the action of protestors who clashed with gardaí after a protest against plans to increase registration fees for third level students.

There was disruption in Dublin city centre this afternoon after protests outside the Department of Finance on Merrion Street and the Dáil on Kildare Street.

A number of people were injured during scuffles with gardaí on Merrion Row, while three gardaí received medical attention after being injured by objects thrown by protestors.

One garda was admitted to hospital with a broken nose, the other two gardaí were treated at the scene for minor injuries.

Gardaí have charged two men in their 20s arrested after the protest.

One has been charged with criminal damage and the other with a breach of the peace.

Both are due in court over the coming weeks.

A third person was released without charge and a file is being sent to the Director of Public Prosecutions.

Union of Students of Ireland President Gary Redmond said he is saddened by the actions of a minority of protestors today.

Mr Redmond said the occupation of the Department of Finance by a number of protestors was not representative of the USI.

He said that many of the clashes with gardaí occurred during the USI address to protestors on Merrion Square.

Gary Redmond said the actions of protestors engaged in a sit-down protest outside Leinster House were also not condoned by the USI.

A garda spokesperson said 50 people entered the lobby of the Department of Finance on Merrion Row but were removed a short time later by gardaí.

Meanwhile, the Socialist Workers Party has accused gardaí of assaulting some of their members and other protestors.

Spokesperson Karl Gill, a student at University College Dublin, said gardaí had aggravated a peaceful sit-in at the Department of Finance this afternoon.

Mr Gill said a small number of protestors who had occupied the Department were forcibly removed by gardaí.

He also alleged that one protestor had his head stamped on by a garda member and he says another female protestor was 'attacked' by a garda dog.

Mr Gill said six arrests were made, which the Socialist Workers Party is claiming were unlawful.

An estimated 40,000 people marched to Merrion Square, where they were addressed by student leaders.

The union said any attempt to impose cuts on students will meet with strong opposition.

USI says thousands of students will be forced to drop-out of college if the registration fee rises again.

'All areas considered for reductions'

The Taoiseach refused to be drawn in the Dáil this morning on whether third-level fees would be introduced or capitation fees increased in the forthcoming Budget.

He also rounded on the Labour Party decision to abolish third-level fees, branding it 'not very socially progressive'.

Brian Cowen said it was imperative that all areas would be considered for reductions and no area could be ring fenced or immune to cuts.

The Taoiseach said he could not divulge what was being discussed at Cabinet but no decisions had yet been taken. A good discussion was ongoing in relation to such matters, he added.

The Taoiseach was responding to Labour Party leader Eamon Gilmore who said the revised Programme for Government had committed not to increase student contributions.

Mr Gilmore said the revised programme was produced in an economic environment that was not radically different from now.

He said it did not make sense to put more obstacles in the way of young people continuing education.

Mr Cowen accused the Labour Party of abolishing third-level fees for all in an attempt to hold onto its middle-class vote.

The Cabinet is considering other education cuts too, among them, Department of Education sources say class size at primary and second-level is likely to be increased. 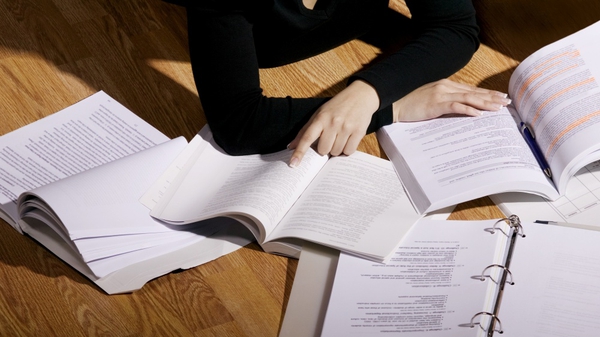