Social Protection Minister Éamon Ó Cuív has said his department is facing significant cutbacks in the budget which will affect a number of benefits.

Minister Ó Cuív told delegates at a regional conference of Fianna Fáil members in Co Clare that the current budget in his Department is €21bn and accounts for 38% of the Government's current spending.

He said the Government is still working out the details of the budget but he said one thing is for certain, there will be significant cutbacks in the budget of his department.

Meanwhile, the Minister of State at the Department of Enterprise, Trade and Employment, with special responsibility for Labour Affairs, Dara Calleary told delegates that the Government is determined to push for reform and transformation of the public service despite actions by some lower paid civil servants about banking time.

Mr Calleary said the reluctance among some lower paid public servants to give up weekly time to lodge their paychecks showed there is entrenchment and considerable resistance to that change.

But he said the Government have an action plan about reform and transformation under the Croke Park Agreement in which they have given guarantees about pay and he said that they are determined to implement the plans in these very difficult economic times.

Those who do not support the plan do not also have its protection, he added.

Last night, the Taoiseach said that closing the gap between spending and revenue is now critical to the country's future.

Speaking at a ceremony to mark the 60th anniversary of the ICMSA in Limerick, Mr Cowen said failure to implement a four-year budget strategy that included spending cuts, tax rises and a plan for growth would put our chances of economic recovery at risk.

He said getting the public finances under control would reduce the cost of borrowing money on the international markets and would help to create and maintain jobs.

Ministers have been meeting this week to consider measures to reduce the deficit by €15bn.

The Taoiseach said the cost of the Government itself had already been reduced and that all costs are being kept under review.

Meanwhile, Fianna Fáil MEP Pat The Cope Gallagher said he did not believe that the former Ireland and Celtic footballer Packie Bonner had been approached to stand for Fianna Fáil in the Donegal bye-election.

He confirmed that a number of overtures had been made for him to return to stand in the bye-election although his election to Europe had caused the seat vacancy in the first place.

Mr Gallagher said he remains committed to his work as an MEP for the constituency of North West. 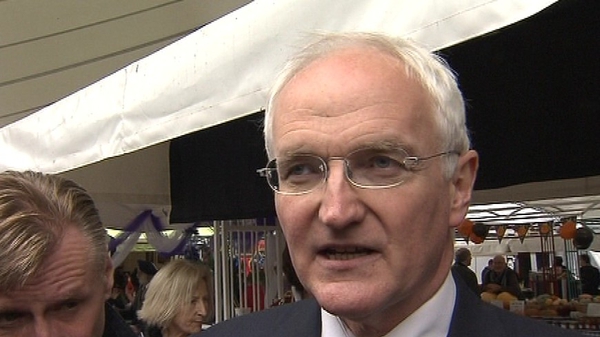 Govt aims to 'strike a balance' in Budget