Inquests into the deaths of 52 people killed in the London bombings on 7 July 2005 have begun.

The inquest heard that the four suicide attackers made smaller bombs they could have thrown at police if they had been stopped before carrying out their plot.

The main devices used in the attacks contained several kilograms of homemade high explosives created from a mixture of hydrogen peroxide and pepper and were detonated by a nine-volt battery.

When police raided the plotters' main bomb factory in Leeds five days after the attacks, they found equipment and chemicals scattered everywhere.

Hugo Keith QC, counsel to the inquests, said there was no attempt to hide the bombers' 'evil work' and it was plain they had no intention of returning.

Officers also discovered a gun and other improvised explosive devices in the cars left by the four attackers at Luton station on the morning of 7 July.

The Nissan Micra used to take three of the bombers from Leeds to Luton contained eight homemade bombs, half made from shallow dishes and the other half from tubes.

Mr Keith said: 'It may be that the intention of the bombers had been to throw them if they were apprehended and came under attack.'

The plotters used 18 Alexandra Grove in Leeds as their main bomb factory from May until the day of the attacks, the inquest heard.

The property is a ground-floor local authority flat rented by a man who had returned to Iraq and left the keys with a relative who sub-let it to King's Cross bomber Jermaine Lindsay, 19.

When police searched the address on 12 July, 2005, they found an improvised bomb detonator made from a light bulb, wire, aluminium foil and a high explosive called HMTD.

They also discovered respirators, extracts from a bomb-making guide known as the Anarchist's Cookbook on a broken CD and scraps of paper listing equipment the plotters needed to buy and the quantities of chemicals to mix to make the explosives.

Officers found evidence that the bombers got through at least 34 milk pans, which were destroyed by boiling the concentrated hydrogen peroxide.

Mr Keith said: 'The extraordinary chaos and profusion of equipment scattered throughout 18 Alexandra Grove makes it plain, you may think, that the bombers took no steps to clear up behind them in an attempt to hide their evil work.

'They had no intention of returning, you may deduce.'

The bombers were seen carrying heavy rucksacks packed with their homemade explosives, kept cool with ice packs, as they travelled to London's King's Cross station and transferred to the London Underground.

Mr Keith said: 'From the damage wrought, forensic investigators concluded that each of the bombs consisted of several kilograms of high explosives.

Hasib Hussain, 18, the only one of the four not to detonate his bomb on an Underground train, apparently bought a nine-volt battery at a WH Smith store in London to replace a failed component in his device.

A damaged nine-volt battery was found at Tavistock Square, the scene of the number 30 bus bombing by Hussain.

'Although no other batteries were found due to the extraordinary devastation of the sites and those contaminants, it is likely that electric detonation was used for all the bombs,' Mr Keith said. 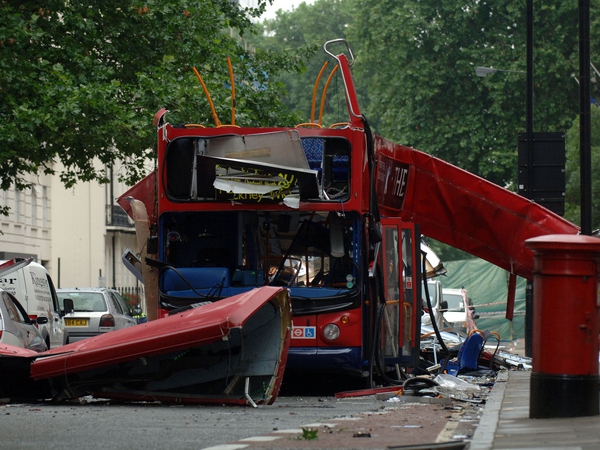