The Government today confirmed the cost of sorting out Anglo Irish Bank would be €29bn, but could reach €34bn in a worst case scenario.

Allied Irish Bank will need up to €3.7bn in additional funds, and Irish Nationwide will need a further €2.7bn, bringing its total bailout to €5.4bn.

Minister for Finance Brian Lenihan indicated that the Government will have to bring in a harsher Budget in December than originally planned.

Mr Lenihan said that the proposed €3bn in cuts would have to be increased.

Speaking at Government Buildings, he said he would not be drawn on what those additional cuts would be, until the Government had analysed exchequer returns due next week.

Mr Lenihan said that while the overall level of State support to the banks remains 'manageable', there will have to be further 'consolidation' of the public finances next year.

Taoiseach Brian Cowen has said that the fiscal situation faced by the country is not sustainable.

Speaking on RTÉ’s Six One News, he said the Government had to set out a four-year budgetary framework for the sake of certainty and to set out a credible pathway. That framework will be published at the start of November.

Mr Cowen said those who lend Ireland money had to be convinced.

The Governor of the Central Bank said that even after today's banking system announcements, the total figure was still one that could be worked out without external help.

Patrick Honohan said the process would be painful but, while the bill was colossal, it was manageable.

The Government had committed €23bn to Anglo by the end of August.

The bank is to be split into an asset recovery bank and a funding bank.

The Financial Regulator said the asset recovery bank would need €29bn, while the funding bank would require €250m.

Its estimate was based on advice from the National Asset Management Agency on how much it will pay Anglo Irish Bank for the loans it is taking on.

The bank has taken discounts of 58% so far, but the Regulator's assessment estimates a discount of 67% on the remaining loans.

But the Regulator carried out an additional assessment based on an 'extreme' scenario, which included a discount of 70% on the rest of the NAMA loans. This led to the additional €5bn 'extreme' estimate.

A special Cabinet meeting last night signed off on the figures. The early morning announcement was timed to secure a head start on markets that have been nervous about the scale of the State's exposure to Ireland's banks.

In a statement, Finance Minister Mr Lenihan said greater certainty on the final cost of repairing the banking system would provide reassurance to the international markets.

He added that the National Treasury Management Agency had decided not to proceed with the remaining auctions of Government bonds scheduled for the next two months, but would return to the bond market in 2011.

AIB and Irish Nationwide will also require more money from the State.

The development will push Ireland's deficit to 32% for this year, according to the Minister for Finance.

AIB will need a further €3bn on top of existing State funds being converted into shares.

That is likely to push the Government's shareholding to a majority stake potentially over 90%, but the bank will retain a stock market listing.

Irish Nationwide will need a further €2.7bn, bringing its total bailout to €5.4bn.

Minister Lenihan has confirmed that AIB Chairman Dan O'Connor will step down within the coming weeks.

AIB's Managing Director, Colm Doherty, will also leave the bank before the end of the year.

Asked whether the pair had chosen to stand down or had been asked to leave the institution, Mr Lenihan said discussions had been conducted with AIB on his behalf by the NTMA and agreement was reached.

He said there has to be change because the existing board has been unable to attract sufficient capital.

The minister said that in conjunction with the recapitalisation of the bank, he expects there will be progressive management and board changes at AIB.

The Government has accelerated the process of transferring loans to NAMA to get final figures to repair Ireland's banking system.

A statement from eurozone finance ministers meeting in Brussels described today's banks statement as an 'important and helpful clarification of the situation'.

Market analysts welcomed the figures, saying they provide much-needed clarity on the anticipated final cost of the Irish bank restructuring, which could come to €46bn in total.

Irish borrowing costs meanwhile fell slightly on bond markets after the announcements on the banks.

This evening, the interest rate demanded by investors to lend money to Ireland for ten years was at 6.76% - down from 6.9% at the start of the day.

In the Dáil, Fine Gael said the Government's policy had catastrophically failed.

The Labour Party dubbed today 'Black Thursday' and Sinn Féin proposed a vote of no confidence in Brian Lenihan. 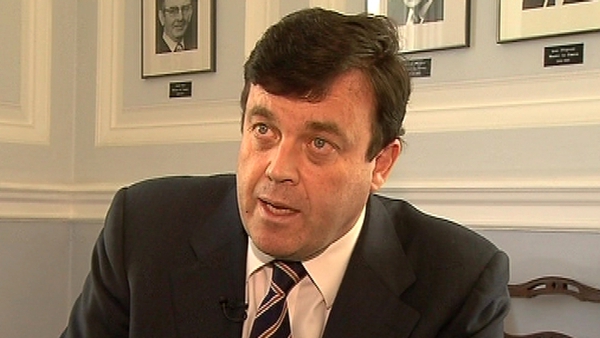