Taoiseach Brian Cowen has described criticism of his performance during an interview on RTÉ's Morning Ireland this morning as 'a new low in Irish politics'.

Mr Cowen said such accusations were 'ridiculous and uncalled for'.

The interview sparked a wave of criticism from Opposition TDs, with Fine Gael Finance Spokesman Michael Noonan claiming there were concerns over the leadership of the country.

'There was a feeling this morning ... that this can't continue, the game is up.'

During the interview, Mr Cowen mistakenly referred to the Croke Park Agreement as the Good Friday Agreement.

Mr Noonan said that what struck him was the uncertainty in Mr Cowen's approach and that the Taoiseach had no clear answers.

Labour spokesperson Roisin Shortall said the interview was inept and claimed only an election could save the country.

But speaking at the close of the Fianna Fáil parliamentary party meeting in Galway this afternoon, the Taoiseach said he had no regrets about doing the interview and stood over the substance of what he had said.

He described Mr Coveney's tweet as 'pathetic and pitiful' and said it was politically motivated.

Mr Cowen said he was sorry he was hoarse, but there was no question of him being under the influence of alcohol. He described such suggestions as nonsense, which 'should be left in the dustbin'.

He said he intended to do more early morning radio interviews and joked that he would hate to leave RTÉ with a vacant slot.

Mr Cowen said there were no depths to which Fine Gael was not prepared to go to try to make capital out of something with absolutely no foundation.

Minister for Tourism, Culture & Sport Mary Hanafin said the Taoiseach was definitely not drunk and definitely not hungover during his Morning Ireland interview.

Speaking on RTÉ's Prime Time programme, Ms Hanafin said Brian Cowen was hoarse and she could not understand how Simon Coveney extrapolated from that that Mr Cowen was hungover.

A spokesman for the Green Party said 'the Taoiseach has dealt with this issue. We need to get on with the work in hand and deal with the challenges that face us.'

As the controversy over the Taoiseach's radio broadcast was unfolding, the head of the National Asset Management Agency was briefing members of the Fianna Fáil parliamentary party on the recovery strategy it is adopting with bankers and developers.

Frank Daly said developers were, by and large, co-operating with NAMA, but he warned that firm action would be taken against those who were not prepared to work with the agency.

His message was that NAMA is going to take tough decisions and will get results.

The economy is continuing to dominate exchanges between the two main political parties with two weeks to go before the Dáil resumes.

Yesterday, Minister for Finance Brian Lenihan indicated that further cuts beyond the €3bn already signalled could be necessary.

But the Taoiseach stressed that it was important to emphasise the strengths of the Irish economy before the forthcoming tough Budget. 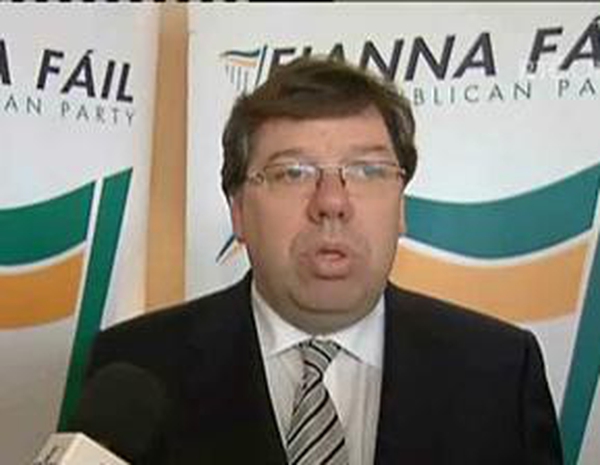