Chief Constable of the PSNI Matt Baggott has said dissident republican activity in the North cannot be dealt with by policing alone.

He said he did not think it a betrayal if politicians engaged in political dialogue with such groups.

Speaking on RTE’s This Week, Mr Baggott said there would have to be conditions attached to any dialogue with dissidents.

He also said they were a ruthless group who were prepared to target young mothers because they wear the PSNI uniform but that they would not succeed in their violent ways.

Mr Baggott was speaking after three children were injured in Lurgan, Co Armagh yesterday when a device intended for police exploded in a wheelie bin.

There has been strong condemnation of the attack, which is being blamed on dissident republicans.

Northern Ireland's First Minister Peter Robinson said the bomb attack was designed to maim, injure and kill whoever happened to be close by, including children.

He said there could be no doubt as to just how depraved and evil these criminals were.

Attacking young innocent children was callous and shows a complete disregard for the people of Northern Ireland, he said.

Mr Robinson said all right- thinking individuals will be absolutely appalled at the recklessness of these actions.

Those involved in these attacks need to know that they will not succeed in taking society back, he said.

No cause or belief would be served by attacks on our children, he said.

These attacks must stop and stop now, this is not the way forward for any section of our society, he added.

Mr McGuinness called on anyone with any information whatsoever to contact the authorities and to prevent others from being injured or killed.

He said he had been about 100 yards away conducting a wedding at a temporary church being used by the parish when the blast happened.

He said it was a miracle no-one was killed or seriously injured.

Security forces came under attack overnight in Lurgan as they attempted to deal with two bomb alerts.

British army bomb experts dealt with a series of alerts in Belfast, Newcastle, Derry and Lurgan since yesterday. Most have proved to be hoaxes. However, in Lurgan a bomb concealed in a wheelie bin went off.

Three children, including a two-year-old, passing by received minor injuries. The device had apparently been intended to kill or injure police as they cleared the area while investigating a report of a suspicious object at a nearby school.

That alert ended at around 3am a further one not far away at Lake Street close to the Kilwilkie Estate and the railway line, which led to the line being closed, was declared a hoax.

The railway line has now been re-opened and trains are running normally again.

As security forces dealt with these alerts the PSNI say they came under attack from petrol bombs and other missiles thrown by youths. Police have been working with community representatives to try to restore calm.

Meanwhile, police in Newry are investigating a petrol bomb attack that destroyed a car last night.

The red Renault Laguna was parked outside a house at Drumalane Park around 11pm.

The device is believed to have been thrown from a silver Renault Megane car. The vehicle was set on fire. No one was injured. The PSNI have appealed for information. 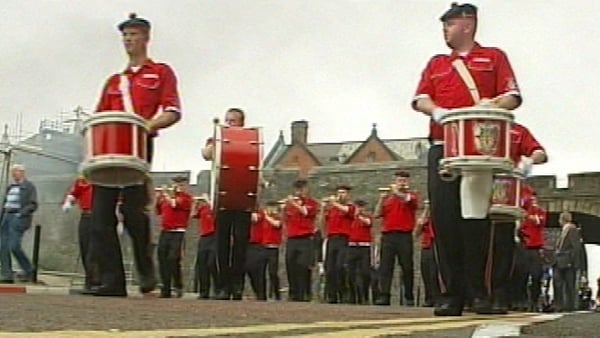