The number of people hit by Pakistan's worst floods in generations has risen to 4m.

A top UN envoy has been sent to mobilise international support and address the urgent plight of millions affected by torrential monsoon rains.

The death toll from the disaster, now in its second week, stands at 1,500.

At least 22 people died today when a passenger bus plunged into a flooded river in Pakistani-administered Kashmir, officials said.

Rains are also spreading into Pakistan's most populous provinces of Punjab and Sindh.

'What we are facing now is a major catastrophe,' said the UN Office for the Coordination of Humanitarian Affairs in Pakistan.

Officials warned that dams could burst as heavy rain lashed the Punjab town of Kot Addu, transforming the area into a giant lake.

UN special envoy Jean-Maurice Ripert today is visiting affected areas in the northwest, where officials say there has been a lull in rainfall and water levels are receding.

The UN World Food Programme says 80% of food reserves have been destroyed in the flooding, while Pakistan's meteorological department has issued new warnings of rain to come elsewhere.

In Sindh, authorities warned that major floods were expected this weekend in the fertile agricultural area of Katcha along the Indus river.

The number of affected districts in Punjab rose to seven and alert warnings were issued in five districts of Sindh to the south, the UN said.

Although Prime Minister Yousuf Raza Gilani has said about 100,000 people have been rescued and 'relief items in sufficient quantity' provided, many say they have received no assistance from the government, only from local families.

Particular scorn has been heaped on the deeply unpopular President Asif Ali Zardari for pressing ahead with visits to Paris and London at the height of the disaster.

An international relief campaign is stepping up including a $10m aid package from the US, Pakistan's anti-terror ally.

Click here for details of Irish aid agencies responding to the disaster. 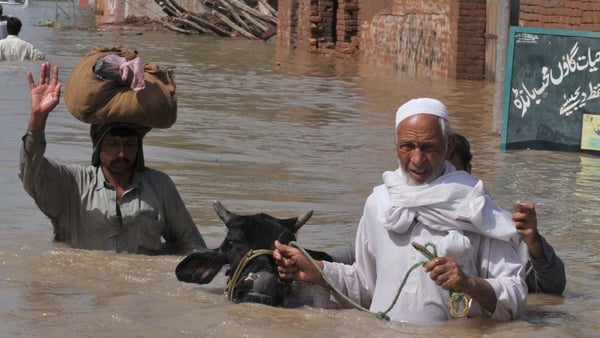